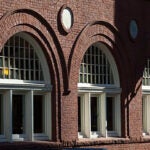 Historic theater to be renamed

Fourth-grader Rashad Brown Mitchell and third-grader Naia Walter are proud of their school. As its ambassadors, they get to show off the E. Greenwood Leadership Academy to visitors.

And they aren’t shy about their roles. The pair confidently point out the indicators of student success that dress up their classroom doorways and halls.

“This shows the different classrooms and their attendance, how many kids come to class each day,” said Rashad, pointing to an elaborate grid, one of several progress charts prominently displayed. Student attendance at the Greenwood has risen to 95 percent.

The school, nestled in Boston’s Hyde Park neighborhood, is a happy, successful place. But it wasn’t always so.

In 2009, Greenwood was counted among the Boston Public Schools’ (BPS) lowest performers. The district was threatening to close the school’s doors because it was failing. Greenwood had not made Adequate Yearly Progress (AYP) — a measure of student proficiency reported through MCAS scores — in math since 2006. It had also failed to obtain AYP in English language arts.

Greenwood Principal Maudlin Wright remembers 2009 well. She had planned to retire from her previous school at the end of her tenure, but was brought in by BPS to turn Greenwood around.

“Everything needed to change,” said Wright, from the internal climate to the instruction to parent engagement to school pride.

Two years later, the Greenwood is on a solid path to success thanks to strong leadership, the commitment and dedication of teachers, and a network of support from Harvard, its partner university.

Last month’s MCAS scores delivered powerful evidence of that success. Gov. Deval Patrick lauded the academy as one of 10 schools in the state with the biggest combined increases in the percent of students scoring “proficient” and “advanced” for all ages combined on the MCAS. In the third-grade classes alone, there was a 19.5 percent increase in student math performance from 2010.

“School improvement comes about when schools have the tools they need to improve and their focus on student achievement is front and center,” said BPS Superintendent Carol R. Johnson. “The E. Greenwood Leadership Academy is a great example of that. Harvard has been a critical partner, providing everything from after-school support and homework help to parent engagement, leadership training, and professional development for teachers. It’s partnerships like these that have a huge impact on teaching and learning.”

“This school has made incredible gains,” said Paula Finklestein, a veteran urban principal and educational consultant, who has worked with Wright one day a week since she came to Greenwood.

“It usually takes three to five years to turn a school around. Ms. Wright was able to do this in two years. That’s fabulous. I feel like a proud grandmother,” said Finklestein.

The ‘guide on the side’

Wright is one of a handful of BPS principals who serve schools supported by Step UP, the five-university initiative that provides resources for 10 underperforming Boston public schools. Step UP was created by the universities, under the leadership of Mayor Thomas M. Menino, to boost student achievement.

At Greenwood, Finklestein offers Wright and her teachers sustained on-site leadership coaching and professional development through the Harvard Achievement Support Initiative (HASI). Greenwood also uses the HASI SmartTalk program, which is designed to improve the quality of academic programming in out-of-school time through the use of hands-on learning materials, coaching support, and ongoing professional development for staff. Harvard also has hosted training sessions for teachers and parents, as well as for City Year members, who support both daytime and after-school efforts.

Finklestein, who calls herself the “guide on the side,” draws from nearly 20 years as a principal in a Chelsea school that faced many of the same challenges as the Greenwood.

Data is the driver

Wright’s turn-around plan was rooted in the numbers.

According to Finklestein, principals and teachers get scores back from assessments but don’t necessarily know how to translate that data to see what is working, what is not, and what needs to change.

“We use the data to ask the right questions … where are students failing, what are the standards, and are they being taught/not being taught?” said Wright.

Then she took what they learned and made pivotal changes to support Greenwood teachers in reaching the children. Wright worked with teachers to put in place interventions for students who were not reaching their potential. She used the data to understand existing strengths and gaps within classrooms to more accurately target support where it was needed.

Teachers were encouraged to celebrate and display student work. The hallways were transformed into vibrant corridors painted with motivational messages from the world’s great leaders.

On the curricular front, the school shifted from a place where teachers worked in isolation, on their own, to a place defined by its atmosphere of sharing and support.

“There is a community atmosphere now at the Greenwood,” said Betty Solomon, a third-grade teacher, who also taught there prior to 2009. “We’re a family working together for one goal — and that goal, of course, is for the success of our children.”

Today, regular teacher meetings focus on analyzing assessments and sharing strategies and best practices. Teachers submit their lesson plans for review. And teachers at the same grade level are on the same page, teaching the same curricula at the same pace to share challenges and practices together.

In the meantime, the Greenwood has become a celebrity of sorts. Calls of congratulations are rolling in. Just last week, a group of teachers from Iceland visited the school to learn best practices.

“I was planning to retire from my other school,” said Wright as her school ambassadors showed off the new playground and outdoor classroom behind the school. “I feel really great about what’s going on in this school, and it needs to continue.”

“And when I retire I’m going to work with Paula to build schools,” she added. Then Finklestein chimed in, finishing Wright’s sentence like a partner does, saying, “… schools of excellence together, just like this one.”