The return to recycling 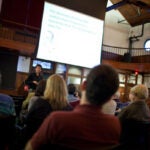 He blended it with science

If you think today’s emphasis on recycling represents a revolution in human behavior, think again.

Before the Industrial Revolution and the advent of cheap consumer goods, throwing things away was a last resort as homeowners repaired, repurposed, and recycled home goods until there was little left to use.

Then they gave the leftovers to the ragman.

Susan Strasser, the Richards Professor of American History at the University of Delaware, said Thursday that recycling’s history gives it a place near and dear to the American heart, a place usurped by the Industrial Revolution’s production of cheap consumer goods but partially restored in recent times.

Strasser, author of the book “Waste and Want: A Social History of Trash,” spoke at Harvard’s Geological Lecture Hall as part of the Peabody Museum of Archaeology and Ethnology’s fall lecture series, “Trash Talk.”

In her lecture, titled “Rags, Bones, and Plastic Bags: Trash in Industrial America,” Strasser tracked the evolution of refuse from the 19th century to the present. Before the Industrial Revolution, Strasser said, trash was virtually unknown. Without widespread mechanization and absent a ready supply of consumer goods, people developed the skills to make and maintain the things they owned.

Women sewed and knitted, turning the family father’s torn pants into the son’s smaller pants, she said. Bits of old clothing were used in quilts, and then the worn-out quilts themselves were put to other uses, such as padding a homemade chair. Men built and repaired furniture and regularly reused items around the home for other purposes.

“The 19th century world regarded reusing materials as a matter of common sense, of stewardship of material goods,” Strasser said.

The production cycle of goods was also different from today, functioning as more of a closed loop, within which merchants and peddlers didn’t just sell goods, they reclaimed what the family couldn’t reuse — scraps of metal, cloth rags, bits of glass — and turned them into new goods.

“Production and disposal were part of the same process,” Strasser said. “Through the early part of the Industrial Revolution, there were no landfills, no incinerators. There just simply wasn’t that much trash.”

The result, Strasser said, was that homes were operated in a cultural framework that valued individual handiwork and the maintenance of a family’s possessions for years and even generations.

“People used to be stewards of things, and their reuse was a fundamental skill of life,” Strasser said.

By the end of the 19th century and early in the 20th, that had begun to change. New manufacturing methods allowed the mass production of goods, lowering their cost even as railroads ensured they were available throughout the nation. The lowered cost also lessened incentives to care for things as diligently as in the past. In addition, a whole new category of consumer goods arose: disposables, made with the express purpose of eventually being thrown away.

With industrialization came the idea of “affordable luxuries,” an increased emphasis on fashion, style, and acquiring the latest technological innovations. What also arose was an association of poverty with mending things and reusing them.

As consumer society took hold, cities began to institutionalize the easy creation of trash through garbage pickup. For the first time, families could drop things they no longer wanted into a trash can, cart it to the curb, and never see the trash again.

“Industrialization created waste on a previously unimagined scale. It added up to a seismic shift in the individual’s relationship with the material world,” Strasser said. “People who once made things now bought things.”

Living in industrial society withered away the handiwork skills once essential in families. Today, Strasser said, most people couldn’t create the goods needed for basic living even if they had to, though some of those skills, such as knitting, continue as hobbies.

But the transition hasn’t been all bad, Strasser said. Many goods available today couldn’t be produced in the home even if one wanted — such as computers, televisions, and other advanced electronics. Strasser also said that the old days had their own problems. The handiwork skills that were lost, while valuable in everyday living, also took lots of time to exercise. Women in particular gained a lot of freedom to choose how to spend time not dedicated to sewing, knitting, canning, cooking, and other tasks. In addition, our societies are much cleaner and healthier, thanks to modern sanitation and trash removal.