‘Nixon in China’ and at Harvard 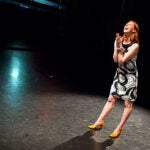 The disciplines of dance

Harvard President Drew Faust will host a panel discussion with the alumni behind the groundbreaking opera “Nixon in China” as part of Harvard’s 375th anniversary celebration.

The Nov. 15 event at the American Repertory Theater (A.R.T.) will offer analysis of the opera, an account of former President Nixon’s 1972 visit to China, most recently on view at The Metropolitan Opera in New York City last year.

“ ‘Nixon in China’ pushed the boundaries of opera and theater and is a stellar example of our alumni’s contribution to the arts.  It is particularly fitting that during this anniversary year, as we contemplate what Harvard has been, is, and will become, we look for opportunities to focus on and to highlight our efforts to bring the arts closer to the cognitive life of the University,” Faust said.

Born in Worcester, Mass., in 1947, Adams began composing at the age of 10. He studied under Leon Kirchner, Roger Sessions, Earl Kim, David Del Tredici, and conducted Harvard’s Bach Society Orchestra and was a reserve clarinetist for the Boston Symphony Orchestra and the Opera Company of Boston. His works include “Short Ride in a Fast Machine,” “On the Transmigration of Souls,” “Shaker Loops,” and “Doctor Atomic,” which features a libretto by Sellars. Adams was awarded the Harvard Arts Medal in 2007 and in 2003 received the Pulitzer Prize for “On the Transmigration of Souls,” written as a memorial for those lost in the terrorist attacks of Sept. 11, 2001.

Sellars was born in Pittsburgh and attended Philips Academy in Andover, Mass., before matriculating to Harvard. As an undergraduate, Sellars was highly active in the theatrical activity around campus. He has directed opera, theater, and film, and has served as artistic director of the Los Angeles Festival, the American National Theatre at the Kennedy Center, the Boston Shakespeare Company, and the Elitch Theatre for Children in Denver. He is a recipient of the MacArthur Prize Fellowship and was awarded the Erasmus Prize at the Dutch Royal Palace for contributions to European culture. He currently teaches in the Department of World Arts and Cultures at the University of California, Los Angeles. He was awarded the Harvard Arts Medal in 2007.

Born and raised in St. Paul, Minn., Goodman studied English and American literature at Harvard and also wrote the libretto for Adams’ “The Death of Klinghoffer.” Now an ordained Anglican priest, Goodman is the chaplain at Trinity College in Cambridge, England.

The American Repertory Theater, whose mission is to expand the boundaries of theater, is one of the country’s most celebrated resident theaters and the winner of numerous awards — including the Tony Award, the Pulitzer Prize, and regional Elliot Norton and I.R.N.E. awards.