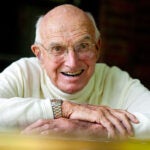 Health officials from China and the United States gathered at Harvard on Wednesday to examine successful reforms around the world and to exchange information on their own efforts, as the two global giants seek ways to extend access, improve quality, and lower the cost of care to their citizens.

Panel discussions touched on a range of topics, including lessons to be learned from other nations’ reform efforts, traditional Chinese medicine, chronic disease control, the role of information technology, the relationship between doctors and drug companies, and how best to achieve universal coverage at low cost.

The image of China that emerged from the early sessions Wednesday was of a nation with universal coverage where access and quality of care vary widely. The discussion also showed a nation grappling with shifting health problems as recent economic growth enlarges its middle class.

Chronic diseases often thought of as occurring mainly in Western, industrialized nations are emerging in China, where type 2 diabetes has become a major health problem, environmental pollution from rapid industrialization exacts a toll, and mental health troubles, plagued by stigma and poor training of providers, are often untreated.

Roughly “173 million adults have mental disorders in China; 158 million never get help,” said Harvard Asia Center Director Arthur Kleinman, the Rabb Professor of Anthropology in the Faculty of Arts and Sciences and professor of psychiatry and medical anthropology at Harvard Medical School, who has conducted research on mental health in China since 1978. “There’s much to be done in this area.”

Chen said the cost of improving care remains a hurdle, which is why China is looking to other nations for cost-effective solutions.

“With limited funding, we have to choose suitable, affordable, effective technology,” Chen said. “We are looking at examples from any other country.”

Chen said that the government is pushing to address environmental problems and that solutions extend beyond the reach of the health ministry alone. A number of ministries are collaborating to address problematic issues, with a focus on heavy metals, noise pollution, and persistent chemical contamination. In addition, he said, local governments are also focusing more on cleaning up the environment.

As for the United States, health care reforms approved last year are already bearing fruit, Glied said. Senior citizens have seen medication costs decrease, and about a million young adults under age 26 have insurance coverage because of the reforms.

Glied said the U.S. government is continuing to draft regulations to put aspects of the law into effect, including ones that would regulate “accountable care organizations,” or groups whose pay is linked to their ability to meet care standards while keeping costs down. Drafting those regulations is proving tricky, Glied said, as regulators seek to balance ways to discourage excess treatment while ensuring patients still get the care they need. Information will be key to the system, but regulations have to balance the need for data with patients’ desires for privacy.

Dean Julio Frenk of the Harvard School of Public Health presented the example of health reform in Mexico, which he oversaw as minister of health there from 2000 to 2006. A key element of reform, Frenk said, was mobilizing public opinion and switching expectations from health care being a benefit of employment — as it generally is in the United States — to it being a right given to all citizens.

Mexican health reformers employed an evidence-based approach that highlighted the system’s shortcomings. In 2000, roughly half of Mexico’s population was uninsured, and the major way that health care was funded nationally was through out-of-pocket expenditures. Paying for health care had become the leading cause of family and business bankruptcy.

“The key is to start with an end in mind,” Frenk said. “In Mexico, we started with defined goals and came up with a series of reforms to achieve them.”

Reforms in the United Kingdom have had successes, but also some failures, according to Simon Stevens, executive vice president of UnitedHealth Group and a health adviser to former British Prime Minister Tony Blair.

By the late 1990s, public opinion of Britain’s government-run health system was at a low, with just one in three of those surveyed expressing satisfaction. Care was characterized by long waiting times for even routine care, Stevens said. People could wait as long as a year and a half for a joint replacement, for example.

One area where things haven’t gone well has been with intended reforms in electronic medical records, Stevens said. The British medical information technology system has been deemed a major failure despite enormous cost. Stevens said he believed that the U.S. approach in its recent health care reform legislation, which provides incentives for changes in early years and penalties for not adopting adequate electronic record-keeping systems in later years, will prove more fruitful.

Stevens said one of the most important things that health ministers can do to spur reform is to highlight health problems in the system. By making clear the current system’s shortcomings, they will build momentum toward reform, he said.

“The move to transparency has to be the key to reform,” Stevens said.

Britain is continuing to work to improve care, Stevens added. It has a public website containing statistics on hospitals that includes patient commentary. Britain has created a system to fight the rise of chronic diseases related to lifestyle by letting primary-care doctors earn up to 30 percent more if they show improvement on key indicators.

Similar reforms may be important in the United States, Stevens said, because the obesity rate here has doubled over the past 20 years, and some projections see more than half of U.S. adults being diabetic or pre-diabetic by 2020.