He blended it with science 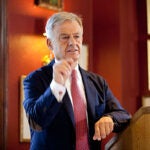 But it’s not just the taste of the scrumptious treat that gets his mouth watering. Exploring its ingredients, how it comes together, and what exactly happens to it in the oven make him just as excited.

“It’s about the material property of brownies,” said an energetic Brenner, who displayed a numeric graph involving the sugar-to-flour ratio in brownies to a crowd at the Radcliffe Gymnasium on Wednesday during an hour-long presentation.

While not a foodie, by his own admission, Brenner is curious about the scientific principles of food. His inquisitive scientific and mathematical mind, combined with a dynamic teaching style, made him ideally suited to help develop Harvard’s megahit class, “Science and Cooking: From Haute Cuisine to the Science of Soft Matter.”

Brenner, Harvard’s Glover Professor of Applied Mathematics and Applied Physics, is also this year’s Suzanne Young Murray Fellow at the Radcliffe Institute for Advanced Study. While at Radcliffe, he will continue with research and writing inspired by the class, exploring how to solve scientific questions raised in the kitchen with the help of mathematical models.

The idea for the class took shape when one of Brenner’s postdoctoral students from Barcelona suggested they recruit the Catalan rock star chef Ferran Adrià to visit Harvard and discuss aspects of food and cooking that can be answered with science.

Adrià’s talk corresponded with Harvard’s effort to revamp its General Education curriculum, and when Adrià offered that he was eager to find a way to continue collaborating, the class was born, with help and support from across the University as well as from chefs near and far.

“It seemed irresistible,” said Brenner of the chance to really “motivate the students toward science.”

Adrià called his veteran cooking friends and enlisted them for the class. Internationally known celebrity chefs regularly made the trip to Harvard to discuss the scientific theme of the week and its corresponding equation. After listening to the lecture, students would tackle the culinary concepts in smaller lab sections.

They made ice cream with liquid nitrogen and baked chocolate molten cakes to explore the physical principles of heating and cooling, calculating aspects like how long it takes for heat to diffuse into the center of the cake. They made cheese to help understand the properties behind protein folding and unfolding. Hollandaise sauce and mayonnaise helped them to investigate the science of emulsion.

Students would perform real science experiments, said Brenner, “and then they would eat them.”

He walked the audience through the dissolution properties of salt and sugar, an experiment he conducted with his students. With the ingredients at room temperature, you can completely dissolve two pounds of sugar in one pound of water, said Brenner. And when the water is heated, “the solubility goes through the roof.” To illustrate his point to his class, he said, he would also circulate a bottle of Coca-Cola. The audience groaned at the implication.

The engagement with students was thrilling, said Brenner, who was overwhelmed by the undergraduates’ response. Students, he said, “were really listening.” And they were learning, too. The mean on the course’s final exam was 90 percent. Last spring, the course culminated with a science fair that included wild creations like hot ice cream, solid soup, and glow-in-the-dark gummy bears.

One of the biggest, most surprising things that Brenner learned from the course, which is being offered again this year, is the notion of the critical synergy that exists between scientists and chefs.

Science, he said, is “really about taking risks. It’s really a subject in which failure is very important. In fact, if you are not failing enough, then you are not succeeding.”

The chefs, added Brenner, had very much the same mindset. They were “always inventing crazy ideas that didn’t work, [but cooking] it’s an experimental science. … For them … failure was the most important thing.”

Radcliffe Fellow Victor Valle, who is using his fellowship year to work on a book called “The Aesthetics of Fire: On the Art of Chile Eating,” told Brenner that the talk inspired him to enlist the help of scientists at Radcliffe to pursue “a kind of a ridiculous idea.”

See a list of upcoming lectures in the Science & Cooking series.