From a flat mirror, designer light 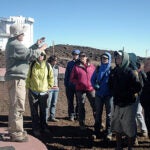 With the Earth as teacher

An optical phenomenon that defies laws of reflection and refraction

Exploiting a novel technique called phase discontinuity, researchers at the Harvard School of Engineering and Applied Sciences (SEAS) have induced light rays to behave in a way that defies the centuries-old laws of reflection and refraction.

The discovery, published Sept. 2 in the journal Science, has led to a reformulation of the mathematical laws that predict the path of a ray of light bouncing off a surface or traveling from one medium into another — for example, from air into glass.

It has been recognized since ancient times that light travels at different speeds through different media. Reflection and refraction occur whenever light encounters a material at an angle, because one side of the beam is able to race ahead of the other. As a result, the wave front changes direction.

The conventional laws, taught in physics classrooms worldwide, predict the angles of reflection and refraction based only on the incident (incoming) angle and the properties of the two media.

While studying the behavior of light impinging on surfaces patterned with metallic nanostructures, the researchers realized that the usual equations were insufficient to describe the bizarre phenomena observed in the lab.

The new generalized laws, derived and experimentally demonstrated at Harvard, take into account the Capasso group’s discovery that the boundary between two media, if specially patterned, can itself behave like a third medium.

“Ordinarily, a surface like the surface of a pond is simply a geometric boundary between two media, air and water,” said lead author Nanfang Yu, Ph.D. ’09, a research associate in Capasso’s lab at SEAS. “But now, in this special case, the boundary becomes an active interface that can bend the light by itself.”

The key component is an array of tiny gold antennas etched into the surface of the silicon used in Capasso’s lab. The array is structured on a scale much thinner than the wavelength of the light hitting it. This means that, unlike in a conventional optical system, the engineered boundary between the air and the silicon imparts an abrupt phase shift — dubbed “phase discontinuity” — to the crests of the light wave crossing it.

Each antenna in the array is a tiny resonator that can trap the light, holding its energy for a given amount of time before releasing it. A gradient of different types of nanoscale resonators across the surface of the silicon can effectively bend the light before it even begins to propagate through the new medium.

The resulting phenomenon breaks the old rules, creating beams of light that reflect and refract in arbitrary ways, depending on the surface pattern.

In order to generalize the textbook laws of reflection and refraction, the Harvard researchers added a new term to the equations, representing the gradient of phase shifts imparted at the boundary. Importantly, in the absence of a surface gradient, the new laws reduce to the well-known ones.

“By incorporating a gradient of phase discontinuities across the interface, the laws of reflection and refraction become designer laws, and a panoply of new phenomena appear,” said Zeno Gaburro, a visiting scholar in Capasso’s group who was co-principal investigator for this work. “The reflected beam can bounce backward instead of forward. You can create negative refraction. There is a new angle of total internal reflection.”

Moreover, the frequency (color), amplitude (brightness), and polarization of the light can also be controlled, meaning that the output is in essence a designer beam.

The researchers have already succeeded at producing a vortex beam (a helical, corkscrew-shaped stream of light) from a flat surface. They also envision flat lenses that could focus an image without aberrations.

The research was supported by the National Science Foundation (NSF), the NSF-funded Harvard Nanoscale Science and Engineering Center, the Center for Nanoscale Systems at Harvard (part of the NSF-funded National Nanotechnology Infrastructure Network), the European Communities Seventh Framework Programme, and the Harvard Faculty of Arts and Sciences’ Science Division Research Computing Group.