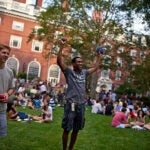 Christine Wu hopes to make the pros, one volleyball save at a time

By volleyball standards, Christine Wu is short. The senior libero clocks in at 5 feet 4 inches. But this season Wu is set to become the all-time digs leader in Harvard history. What’s height got to do with it, anyway?

And what exactly is a dig? “I only play in the back row, and focus on getting the ball up so that we can run our offensive system,” Wu said. But the art of digging — preventing an attack from hitting the ground — is volleyball’s equivalent to sliding into home base. There’s diving, landing, and bruising. And Wu averages more than 400 digs a year.

But on the flipside of the pain lies a bit of glamour. Come January break, Wu will jet off to Europe, not for sightseeing, but for a chance to play in the pros.

“I’m going on an ‘exposure tour’ with some other girls who also want to play professionally,” said Wu, who is also co-captain of the Crimson. “For 10 days we’re going to travel around Italy, Austria, and Slovenia, and coaches will come, recruit, watch, and hopefully it will all work out.”

Heading to Europe means postponing medical school. A concentrator in human evolutionary biology from Naperville, Ill., Wu spent her summer working in a neurobiology lab at Harvard Medical School and studying for the MCATs. “The human body is really interesting to me. I always wanted to be pre-med, be a doctor, and I always thought I’d go straight to med school,” she said. “But, through the years, it’s come down to the fact that I love volleyball so much, and I want to take a few years off to play.”

Wu still plans to return to the United States within three years and enroll in medical school to study orthopedics and sports medicine. “Being around athletes, I’ve seen so many injuries,” she said. “I’ve been injured myself. I’ve been through physical therapy. I know what it takes.”

With a record-breaking season on the way, Wu’s accolades have already begun rolling in. When the Crimson traveled to the Georgia State Invitational earlier this month, Wu was voted to the all-tournament team by the represented teams’ coaches. Last year, she was named to ESPN Magazine’s Academic All-District Second Team and was one of three teammates to play in all 26 games.

Wu said the recognition she’s received is “great because it shows that Harvard student athletes aren’t here on paid scholarships.” (There are no athletic scholarships in the Ivy League.)

“We’re playing because we love the game and want to stick with it and pursue this passion while committing ourselves in the classroom as well.”

“Christine has emerged as a top libero in the Ivy League conference,” said Crimson coach Jennifer Weiss. “This is not based on sure talent but consistent hard work. As our senior captain, Christine demonstrates a daily discipline that is essential to success on the court and in the classroom. We have a solid offensive and defensive system right now, and that all starts with a play from the libero. Christine has always been a playmaker on court, and those around her feed off of her positive and passionate play.”

“It’s definitely going to be a great season,” said Wu. “I’m looking forward to playing with these girls. Sandra Lynne Fryhofer, the only other senior on the team and also co-captain, and I are really trying to pump up the team, and we’ve had three other years under our belts, so we know what it takes. This is the last chance for us to give all we’ve got.”