A tale of two sisters 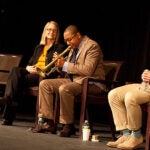 When jazz captures the young

Tayari Jones grew up hearing the story: Mary Woodson White, scorned girlfriend of R&B legend Al Green, doused him with hot grits, supposedly because he refused to marry her.

In her acclaimed new novel, “Silver Sparrow,” Green’s partner makes a cameo, popping into an Atlanta hair salon on that now infamous, grit-laden trek to Memphis. “I was 4 years old when it happened,” said Jones, an Atlanta native.

“I was thinking about the woman who threw grits on Al Green throughout ‘Silver Sparrow’ because, particularly in the black community in the South, that story is referenced so much. Southern people think of history living with us all the time. In the South, we don’t necessarily refer to it as ‘history with a capital H,’ it’s more like shared history. Even in Southern novels that are contemporary, people are always referring to historical events, even just in a casual way. ”

Set in her hometown, “Silver Sparrow” traces the adolescence of Dana Yarboro and Chaurisse Witherspoon, who share the same father, James Witherspoon, a bigamist. James keeps Dana and her mother sequestered from his other wife and daughter, with whom he lives. Only Dana and her mother know about his dual life and heartbreakingly vie for his affections.

Soundbytes: A tale of two sisters

Jones, now a fellow at the Radcliffe Institute for Advanced Study, calls herself “a daughter in a family of sons.”

“I’m from a family that loves its sons,” she said. “So being a daughter, I know what it is to not be the front-runner, and I was able to tap into my own experiences for both the characters of Dana and Chaurisse.”

Aside from her brothers, Jones also has two older sisters with whom she shares a father, but not a mother. “My situation isn’t that remarkable,” she said. “But you know how when you get divorced, you share custody of the children? Well, the children actually have custody of the parents. And I had custody of my father. So growing up, I’ve always just thought about how my life was different than my sisters’. I had a lot of privileges they didn’t have.”

Now fast at work on a fourth novel, Jones writes on a vintage pink typewriter she scored on eBay and had refurbished here in Cambridge.

Titled “Dear History,” the novel is about an innocent man who is released from prison.

“When you see a story like this on TV, or a documentary, you always see him freed, the triumphant ending,” said Jones. “But I’m writing a novel that asks, ‘Now what?’ And a section of the novel is his letters to his wife, and the typewriter is perfect for it because when you’re writing about someone who is under hardship, the easiness of your own life can keep you from grasping the voice.”

Voice is critical in “Silver Sparrow.” Jones wrote half the book in the guise of Dana, before shifting to Chaurisse’s point of view.

Southern writing tends to be a little talky, acknowledged Jones. “You know how the French love speaking French? I think Southerners are self-aware that we love talking Southern. We take a pleasure in language and a pleasure in the way we communicate, and I think that joy comes off in writing. Even if it’s not a happy story, you know the writer is having pleasure in a specific way of communication.”

A faculty member at Rutgers University in Newark, N.J., Jones confesses she never knew how Southern she was until she left the region.

“Leaving the South is a big cultural shift that you don’t anticipate when you live there. It’s such a cliché to say Southerners are friendlier, but they are,” she said.

“I totally consider myself a Southern writer. I am not a writer that gets weirded out by labels. I don’t mind labels, as long as I can have as many labels as I want.”