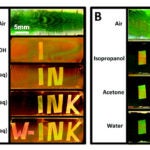 What’s in a liquid

Chemists at Harvard and three other institutions have created a purified version of an organic semiconductor with electrical properties that put it among a small handful of organic compounds and that provides an important proof of concept for a screening process to find new compounds for solar panels.

Alán Aspuru-Guzik, associate professor of chemistry and chemical biology, worked with colleagues at Stanford University, Haverford College, and Clark University to identify, synthesize, and characterize the compound. It was based on a compound created several years ago by a team from Japan. The compound, with the tongue-twisting name of dinapthothienothiophene, intrigued Aspuru-Guzik and Haverford colleague Joshua Schrier, who decided to use computers to model several variations and screen them for improved electrical properties.

That process resulted in seven candidate compounds, from which they selected one, whose synthesis was originally devised by Sergio Granados-Focil, an assistant professor of chemistry at Clark, and was synthesized in the lab of Zhenan Bao, an associate professor in Stanford’s Chemical Engineering Department. Initial measurements by Bao’s group of the compound’s “hole mobility” — a measure of how quickly electrons move analogous to current in a metallic material — showed it was among a small handful of top-performing organic molecules.

“It would have taken several years to both synthesize and characterize all the seven candidate compounds. With this approach, we were able to focus on the most promising candidate … as predicted by theory,” Bao said. “This is a rare example of ‘truly rational’ design of new high performance materials.”

The Japanese team that created the original compound, led by Kazuo Takimiya, also recently reported that it had created the same compound, though its measurements showed that the compound had lower electrical properties.

Though the discovery, reported today in the journal Nature Communications, may have creative applications in electronics, where organic semiconductors are used in thin film transistors and to create extremely thin television screens, Aspuru-Guzik was just as enthusiastic that it provided confirmation of the screening process, based on computer modeling, that he is using to find new materials for solar panels. Sule Atahan, a postdoctoral fellow working with Aspuru-Guzik, said that the close match between the predicted and measured crystal structures of the compound is key, and that theoretical screening is crucial to identify new materials for clean-energy applications.

From a cost standpoint, organic semiconductors still cannot compete with the silicon typically used in photovoltaic panels. But organics — a family of typically large, complex molecules built around a backbone of carbon atoms — have many advantages over rigid, heavy silicon. Organic semiconductors can be used to make flexible display screens and can be sprayed like paint or ink, opening a broad range of applications.

If a compound can be identified for use in photovoltaics, Aspuru-Guzik said, it may find applications where the rigid structure and equipment needed for traditional solar panels preclude their use, such as in the developing world, where more than 2 billion people still don’t have access to reliable electricity.

To identify such a compound, Aspuru-Guzik several years ago began the Clean Energy Project, a distributed computing effort, conducted in collaboration with the IBM World Community Grid, that uses the surplus computing power of idle desktop machines to screen 2.7 million possible candidates. So far, Aspuru-Guzik said, they’ve identified about 5,000 compounds predicted more than 10 percent efficient at converting sunlight to electricity. Additionally, Aspuru-Guzik and Bao have a joint research project, sponsored by the Stanford Global Climate and Energy Program, to use this approach for accelerating the discovery of high performance organic solar cell materials.

When the screening is complete, Aspuru-Guzik said, researchers plan to publish a list of the 1,000 most promising compounds. After that will come the labor-intensive process of making them and checking for properties that improve on materials used in solar panels today.

“We need only one for the world to be happy,” Aspuru-Guzik said.