Of the bean I sing 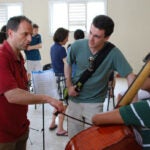 Ten years ago, Venezuelan musician and composer Paul Desenne was teaching cello — his primary instrument — in an old tin-roofed studio atop a building in Caracas. One day he noticed a dot of sunlight on the floor between his legs. There was a new bullet hole in the roof.

In 2002, Desenne left teaching, concert tours, and solo playing behind for the solitude of the jungle-clad mountains south of Caracas. He composed in peace, got by on rice and beans, and — in the leanest years — made only a few hundred dollars.

Desenne, a 2010-2011 Radcliffe Fellow, lived on an old shade coffee plantation. The jungle helped inspire what he calls his “tropical baroque???? work, including “Jaguar Songs” (2002) and “The Two Seasons” (2003), which overlays snippets from a Vivaldi concerto with violins mimicking nocturnal Caribbean frogs. At the same time, Desenne became even more interested in fusing classical European music with the indigenous musical traditions of Latin America — something he had explored beginning in the 1980s.

But the idea of the old coffee plantation also invaded his imagination. After all, importing coffee cultivation brought with it a blend of European and native musical traditions. By the time of his Radcliffe year, Desenne was hard at work on an opera about coffee, a “very baroque bean,” he said, “that followed the same path as this music.”

Desenne called the opera, yet to be named, “a musical fantasy about our past.”

At the same time, he is eager to tell the story of the bean that he said revolutionized the world by accelerating colonization, boosting the slave trade, and — not incidentally — by spawning a tradition of European coffee houses that in turn energized political change, literary life, and capitalism. (Lloyd’s of London, Desenne likes to point out, was founded by the clientele of Lloyd’s Coffee House.)

The rise of coffee was rapid. Early in the 15th century, Arab slave traders brought home accounts of a wild plant that made goats lively. Not long after, Sufi mystics in Yemen were brewing up the roasted bean to stay awake during nocturnal religious rituals. (The same ritual drink — praised for making the mind nimble — was later adopted by Jewish mystics.)

Within a few years, the European appetite for coffee had created a trade deficit, Yemini production was peaking, and colonists had fanned out into the Indian Ocean and Caribbean to find new places to grow it.

“There’s an amazing evolution in three centuries,” he said in his Byerly Hall office recently, “from zero to coffee covering the world.” It’s a subject fit for opera, said Desenne: dramatic, revolutionary, and sensual. (Plans for the opera include a love triangle set in Latin America, and — somehow — a fusion of musical elements, a multilanguage libretto, and by showtime devices that waft the aroma of coffee toward the audience.)

Desenne takes mornings to practice cello, then bikes to his Radcliffe office from the Watertown apartment he shares with his Colombian wife. He was one of 43 fellows at the Radcliffe Institute for Advanced Study here in the spring — and one of 34 who elected to stay through the summer. The stipends are gone, but they still get office space and library access.

Predictably, Desenne’s office has a shelf of books on the history of coffee, a sample of what he called “a huge treasure of literature” on the subject. (Helping with research was William Minot Rafey ’13.)

Literature, music, painting, conversation, evocative jungles — Desenne is a man of many inspirations. Among them is Cuban novelist, critic, and musicologist Alejo Carpentier (1904-1980), an early literary experimentalist in magical realism whose work helped Desenne uncover the storm of influences operating in Latin music. “There is a melting pot there,” he said, whose “mysterious origins” Carpentier explored in fiction, particularly a short novel titled “Concierto Barroco.”

Years ago, Desenne was inspired to explore coffee musically for children. Since then, his conception for an opera has expanded into a desire to explore both the dramatic tension of the coffee story and the abundance of information about the bean that conquered the world.

The plot will include some themes not seen in the usual opera, like the trade deficit that sprang up between Europe and its future colonies, and like the geography of coffee obsession, which spread from Yemen to Java and on to the West Indies and Latin America.

Then there are other themes for what Desenne calls his “documentary opera”: coffee’s “conquest of the night,” its role in the invention of social spaces that turned revolutionary, and — simply — “this drink that made everybody active,” he said.

“In England, coffee houses were the salvation,” said Desenne. “Everything was born there.” Coffee and the places it was consumed were a spur to literature, political reform, newsgathering, schemes for both democracy and profit — and an antidote to alcohol consumption. “In alehouses, everyone just fell asleep,” he said — but by contrast “coffee brings local culture to a boiling point.”

Coffee’s rise in the world was operalike, said Desenne — full of conflict, tension, and romance. Coffee even foreshadowed revolution, and helped replace crumbling feudal empires with the hot necessities of capitalism.

The opera’s music is largely in place, but Desenne is still working with a co-writer on the libretto — a task complicated by his desire to draw in all this rich history. “I want to tie all these strings together,” he said. “My problem is not inspiration. I can compose kilometers of music.”

Look for flashbacks, ghosts, hallucinations, and a haunting chorus in all the languages, from Arabic on, in which the story of coffee was told.

By this fall, he will have a website up, with coffee-related maps, images, and scanned texts. (The domain name is already registered — www.coffeefantutti.com.)

Meanwhile, the opera itself is a work-in-progress. “I have the structure of the ship. I have the ribs,” said Desenne. “But I don’t have the planks around it. It won’t float yet.”

But once it’s done, he said of his ambitious opera, “I want to move around the globe.”

To view current fellows, as well as previous Radcliffe fellows.