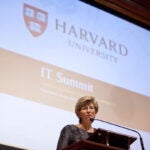 For Harvard, an IT summit

A Harvard University study built around an innovative economic game indicates that, at least for our younger selves, the desire for equity often trumps the urge to maximize rewards.

“We were able to show that 8-year-olds have a general sense of fairness and are willing to make large sacrifices to enforce it with other children,” said Peter Blake, a postdoctoral researcher at Harvard’s Program for Evolutionary Dynamics who co-authored the study with Katherine McAuliffe, a doctoral student at the University’s Department of Human Evolutionary Biology. “Children younger than 8 are more self-interested, yet they’re still willing to deny themselves rewards in order to prevent a transaction that’s unfair to them.”

The study, which was conducted under the auspices of Harvard’s Laboratory for Developmental Studies and appears in the August 2011 issue of the journal Cognition, explores a fundamental principle of economics, namely that humans do all they can — within the bounds of utility and constraints on resources — to maximize the satisfaction they get from consumption. According to this line of thinking, equity is more or less irrelevant to economic decision-making. People make choices based on whether a given transaction will leave them better off than they were before, not whether it will leave them as well off as their neighbor, or even the party with which they do business.

To test these assumptions — and to explore the development of economic decision-making among children — Blake and McAuliffe created the Inequity Game, an activity that allows children to accept or reject an unequal offer, both when it is advantageous to them and when it is not.

As parents and others looked on, researchers paired each participant with an unfamiliar peer — one designated the “decider,” one the “recipient” — and seated the children face to face at an apparatus created especially for the game. An adult then allocated candy on trays designated for each child.

“One kid was in charge of the toy,” said Blake. “He or she got to make decisions by pulling one of two handles in front of them. The other guy was just a passive recipient. If one kid got more than the other, the decider could pull the green handle and accept that outcome, or he could pull the red handle, the candy goes in the middle, and no one gets those.”

Some pairs were tested in a condition that Blake and McAuliffe called “advantageous inequity” (decider gets 4 pieces of candy; recipient gets one); some in “disadvantageous inequity” (decider gets one piece of candy; recipient gets four). Deciders in each condition also got offers of an equal outcome: one piece of candy for each participant.

“The game allows us to look at how one individual reacts to inequity when they are responsible for their own payoffs, as well as someone else’s,” McAuliffe explained. “The main question we were asking was, ‘Would children reject candy to prevent an unfair allocation of resources?’ The design has been very successful because kids enjoy learning about the apparatus and pulling the handles — not to mention the fact that they are motivated by the Skittles!”

Blake and McAuliffe were satisfied, but not surprised, by the results for children ages 4 to 7. The deciders in these groups generally accepted equal offers, as well as offers in their favor. They usually rejected unequal offers, although Blake said that children hesitated before pulling the red handle and sending all the candy — including the piece allotted to the decider — into the neutral bowl.

“They hesitate to reject an offer, even if they’re not coming out on top,” he said. “It’s hard for them to give up that one piece of candy, yet they’re willing to do it, whereas when they get more, there’s no problem. It’s very easy to make that decision.”

McAuliffe said the behavior of the younger children in the study conflicts with the economist’s notion of rational behavior.

“Even a 4-year-old child is willing to pay a cost to prevent a peer from getting more candy, when, in theory, they should accept any nonzero offer,” she said. “On the other hand, if we look at the behavior from the perspective of evolutionary biology and think of individuals in a competitive setting, it may not be irrational to prevent a relative disadvantage, even if it does mean sacrificing personal gain.”

The most surprising behavior occurred among the eight-year-olds in the study. The deciders in this age group continued to accept equal offers and reject unequal offers that were disadvantageous, just as their younger counterparts had done. But 8-year-olds also rejected allocations that were unequal, even when they benefited from the disparities.

“We weren’t expecting to see 8-year-olds willing to sacrifice so much candy to prevent a peer from getting less than them,” said McAuliffe. “In some cases, children were giving up 24 candies in a given session. It shows that fairness or inequity aversion is an important factor in determining how these children behave. Relative rewards do matter.”

In the years ahead, the researchers hope to clarify the motivations behind the behavior they observed in the children. It could be that the participants in the study made their decisions based on internalized norms of fairness. It’s also possible, however, that the children were concerned not with enforcing equity, but with preserving their reputations.

“They could be considering the audience around them and saying, ‘I don’t want to look like I’m being selfish by accepting all this candy. I know that I’ll reap future benefits by rejecting now,’” said Blake. “An awareness of reputation could be emerging. And that’s the next big step to test.”