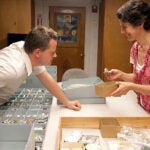 History shines through the glass

Finding clues to managing the Internet by using design principles

The digital revolution is storming the barricades of privacy.

In today’s interconnected world, we are tracked, surveyed, watched, and followed at every turn. Our movements both inside and outside cyberspace are constantly monitored, often with — but also without — our consent.

The Swiss courts are debating a case involving web giant Google’s popular Street View service that offers panoramas of roadways around the globe. But the Swiss aren’t satisfied with the company’s efforts to blur people’s faces and license plates. Their privacy is being compromised, the Swiss complain, despite Google’s claim that their blurring technology is 98 to 99 percent effective. The Swiss want 100 percent anonymity.

Yet for the many millions who are part of the social media explosion, virtual connectedness and the sharing of detailed, personal information via the Internet is a normal, willing endeavor.

A Harvard conference on Friday (June 10) brought a number of perspectives to bear on design issues concerning the line between public and private spaces in the connected world. Organized by Harvard’s Berkman Center for Internet & Society, the symposium united computer scientists with ethnographers, architects, historians, artists, and legal scholars in discussions.

Another theme of his work involves scale, which he explores by studying the experiences of paroled sex offenders in California who are tracked using GPS systems.

For people who have to calculate their movements so as not to come within 2,000 feet of a playground, library, or school, said Dourish, the concept of space takes on a different meaning. There’s “a reconfiguration of the scale in which space is encountered.” That notion is familiar in an online context, he added, as “the scales by which we are connected to others become radically different.”

For some participants, bricks, mortar, and particularly glass can offer potential models for web design. Exploring evolving styles of architecture can yield clues and inspirations on concepts of privacy that help to inform the design of public and private online spaces, said architects in attendance. Glass houses offer notions of “radical transparency,” said one speaker, and redefine the concept of privacy. The open format of a setting like the Seattle Public Library, said another speaker, is “a place of encounter,” much like the Internet.

The Internet’s public platform also can play an important role in reshaping world events. Recalling the Arab spring and the wave of revolutions inspired and aided by social media, Ethan Zuckerman, a senior researcher at the Berkman Center and a specialist in technology and activism, discussed how sites such as Facebook and YouTube have become powerful tools for social change.

Still, such outlets also can be easily disabled, he cautioned.

“We are embracing these spaces without thinking about the implication of moving our public speech into private spaces. We are leaving it up to the owners of these spaces whether or not we are going to be able to use these public spaces for political purposes.”

There needs to be a “dialogue about how we build” these public spaces, Zuckerman added.

When it comes to being wired in, teenagers are at the top of the list. Increasingly, interconnected teens define privacy on their own terms and offer reminders that “social norms matter,” said danah boyd, a senior researcher at Microsoft Research New England who studies social media and youth engagement.

One young teenage subject who was worried about her past, said boyd, would delete any comments left for her by others on her Facebook page as soon as she had read them.

“She had a really interesting way of seeing the structure and how to make it work for her.”

Other teens, said boyd, who is also a research associate at the Berkman Center, used cryptic messages that only some people would understand.

At an early morning session, Jonathan Zittrain, a professor at Harvard Law School and co-director of the Berkman Center, offered the crowd a sobering piece of advice.

“If what you are getting online is for free, you are not the customer, you are the product.”