History shines through the glass 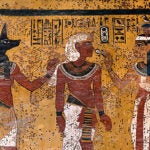 Degryse, a research professor from Katholieke Universiteit Leuven, was on one of his twice-yearly pilgrimages to Harvard to examine the Semitic Museum’s archaeological collections. Degryse is one of several international researchers investigating the properties of ancient glass and other materials to understand more about where and how they were manufactured and what the background says about their makers.

Together with Katherine Eremin, the Patricia Cornwall Conservation Scientist at the Harvard Art Museums’ Straus Center for Conservation and Technical Studies, Degryse is examining Roman-era glass to reconstruct trade patterns, looking at associated collections at the museums, which hold items of an artistic nature. He is also meeting with Eremin to discuss progress on a project to investigate glass from the ancient Mesopotamian city of Nuzi, which was destroyed in 1,350 B.C. The site is in modern Iraq.

Though less spectacular than the far younger Roman specimens, the glass from Nuzi is in some ways the crown jewel of the ancient glass collection, according to Joseph Greene, assistant director of the Semitic Museum.

Excavated in the 1930s by an international team that included Harvard archaeologist Richard Starr, who was associated with the Fogg Museum of Art, the Nuzi finds were divided between the Semitic Museum, which received historic-era materials, the Peabody Museum of Archaeology and Ethnology, which received prehistoric items, and the Harvard Art Museums, which received items created as art. At the Semitic Museum, the Nuzi glass collection has something going for it that some similar collections do not: clay tablets.

The excavation of Nuzi turned up not only glass artifacts, but also thousands of clay tablets, marked in cuneiform, one of the earliest forms of writing. The tablets describe the society of the day and, when combined with the material excavated from Nuzi, create a powerful resource for scholars seeking to understand the Mesopotamian region of more than three thousand years ago.

“Together, they tell us much, much more,” Greene said.

For example, the tablets say the city had large stores of gold and silver, as well as weapons. Though the excavations turned up some metal blades and tools like adze heads, very little silver and gold have been found. Researchers believe it was probably taken when Nuzi was looted in 1,350 B.C.

“We assume the Assyrians took all the gold,” Greene said.

In recent decades, unrest in the Middle East — especially in Iraq — made collections at the Semitic Museum and a handful of other institutions critically important resources for a generation of Mesopotamian scholars, Greene said. Nuzi is located near the Iraqi city of Kirkuk, in a region dangerous for archaeologists to visit. In addition, the looting of the Iraq Museum after the U.S. invasion of Iraq eight years ago created great uncertainty about other Nuzi materials.

Degryse uses isotopic analysis to read the molecular signature of minerals in the glass’ raw material to trace it back to its source. So far, it seems that glass at the time of Nuzi was mainly manufactured in two regions: Mesopotamia and Egypt. Though the glass appears to have been widely traded, Egyptian glass doesn’t show up in Mesopotamia and Mesopotamian glass doesn’t show up in Egypt. Both, however, are present in ancient Greece, Degryse said.

Glassmaking goes back to at least 3,000 B.C. and perhaps earlier, Degryse said. Early glass was made by combining a silica source such as sand with plant ash. The plant ash was a key component because it reduced the melting point of the silica considerably, from 1,700 degrees Centigrade to 1,000 degrees, within reach of the furnaces of that period.

Because the technique of glass blowing wasn’t invented until 100 B.C., early glass vessels were made by applying glass around a clay mold, which was then broken up and removed when the glass cooled. The result was that early glass vessels tended to be thick-walled compared with the more delicate glass of the Roman era.

Early glass was a rare item, reserved for the elite, Eremin said. In Nuzi, it was often colored dark blue, perhaps to mimic the gemstones lapis lazuli or turquoise.

It was only later, during the Roman era, when manufacturing changed to replace plant ash with natron, a mineral soda, that glass became more common outside of the elite classes and began to be used for more functional purposes.

Modern analytical techniques like isotopic analysis weren’t even dreamed of by Richard Starr when the Nuzi materials were originally excavated 80 years ago. Greene said that points to the importance of maintaining collections such as those at the Semitic Museum because future scholars may have ways of analyzing materials that don’t presently exist.

“Archaeological collections are repositories to be interrogated with techniques that weren’t thought of when they were originally collected,” Greene said.