Around the world in many ways 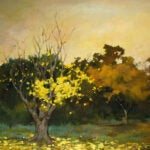 The artistic side of science

Chaplin finishing book on history and influence of circumnavigation

Nothing irritates Joyce Chaplin more than business catchphrases like “unprecedented global services” and “now we are a global society.”

“There’s a much longer history of people thinking globally than simply the last 20 years,” she said. “These people never had the planetary experience of Magellan’s 35 survivors” back in 1521. Chaplin, the James Duncan Phillips Professor of Early American History, is working on a definitive history of circumnavigation, and knows exactly how much precedent these “global services” have, and how long there has been a global society.

“I’ve never written anything with such a long history,” she mused of the project, which began, like the journeys of old, by setting out to sea. “I was out on a ship in the Gulf Stream working on my last book about Ben Franklin. I was starting to work on Franklin’s French correspondence, and was stuck out there at sea, so I needed something to keep me going on that project.”

To resurrect her French skills, Chaplin had brought with her a French edition of Jules Verne’s novel “Around the World in 80 Days.” The idea fueled by the book stuck.

Her new project, a book that will be titled “The Whole World Round,” covers the history of circumnavigation from “Magellan the explorer to Magellan the GPS.”

“I intend it as an environmental history of how people have been doing something on a planetary scale. This is the oldest global activity, and it really opens up questions about the human place in the globe.”

Chaplin has organized her book into three parts, each encapsulating a period in the history of circumnavigation. The first part is called “Fear,” and Chaplin begins her history with Ferdinand Magellan. It was the first around-the-world expedition, although Magellan himself died in the Philippines. Chaplin calls him “the most famous man who never went around the world.”

Other sailors kept trying after Magellan, but, according to Chaplin, “Most of the time, you lost most of your men. The death rates on these early trips are amazing. It was incredibly dangerous.”

And it was an expensive, dangerous business at that.

The second part of the book, called “Confidence,” recounts how the idea of going around the world, and the ability to do so, changed dramatically. By the late 18th century, according to Chaplin, death rates were down. “People now think they have command of the planet. There were better itineraries, better equipment, better ships, and people now survive the trip.”

The people making the trip changed drastically as well. “Now, it’s a casual thing to do.  The ability to go around the world was closely married to the idea of imperialism. Now it was the winners, not the losers, who had the money and resources, who made the trip.”

The last part of the book, working up to our age of relatively easy travel, is called “Doubt.” At this point, from the 19th century up until the present, people have begun realizing there’s a big tradeoff in being able to “conquer the planet.”

“There is doubt that an easy command of the planet is at our fingertips anymore; we have new, fantastically dangerous ways of circumnavigation that reflect the death rates of old. Look at the development of aviation and space travel. We see the same or similar failure rates as in the early modern period. Furthermore, we’re using the planet’s resources in this venture. Is it at all sustainable?”

During this era, people began to look for surrogates to make the dangerous trips for them. “Up until the end of the 18th century, humans were the first surrogates. People would actually capture pilots and make them navigate the route first to see if it could be done. Later we used animals, like when the Soviets sent up the dog, Lika, into space.” The present-day circumnavigators are satellites that Chaplin describes as being “cheerful robot surrogates.”

“Our last chapter would have to be a permanent post on the moon,” said Chaplin of how much things have changed. Even then, she is quick to point out that “We’ve never done anything but go around the world. Even going to the moon, we were still in the Earth’s orbit. We are bound to the planet, and we need to ask why this is, and what would happen if we go beyond it.”