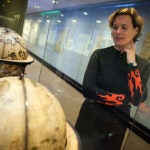 Around the world in many ways

First delivery of Fisk parts arrives at the Memorial Church

But the singers, who sang a line from the hymn “O Praise Ye the Lord! Sing Praise in the Height” that included the words “loud organs, his glory forth tell in deep tone,” knew exactly what they were doing.

“I thought the most appropriate way that we could welcome in this instrument is by singing to it,” said Edward E. Jones, Gund University Organist and Choirmaster, who led the voices. “This has been a long process and to actually see it arrive … it’s amazing.”

The singing quickly gave way to more rigorous physical activity as the group helped move to the church the first of four deliveries of the 16-ton organ’s thousands of parts.

“We are going to go slowly today,” said Greg Bover, the project manager and vice president of operations for C.B. Fisk Inc., the Gloucester, Mass., company founded by Harvard graduate Charles B. Fisk in 1961. “The most important thing is that nobody gets hurt and none of the organ parts get damaged.”

Murray Forbes Somerville was supposed to be on a plane back to Nashville, but changed his ticket so he could greet the new organ.  The former organist and choirmaster at Memorial Church, Somerville plays a Fisk Opus 134 at a church in his hometown.

“It’s the best organ I have ever played, anywhere, bar none, including Westminster Abbey and all the Baroque organs in Germany. … If this [new] instrument is even three-quarters as good as the instrument in Nashville, this is going to be absolutely glorious.”

Over the next several weeks the new organ will be reassembled in the church’s second-floor rear gallery, completing a donor-funded $6 million renovation project. Last year, the church’s original Fisk organ, Opus 46, which had been housed in Appleton Chapel since 1967, was dismantled and shipped to a Presbyterian church in Austin, to make way for a 1929 Skinner Organ Co. instrument. The new Fisk organ will provide sound for the main body of the church, while the Skinner will serve the chapel space.

As the group prepared to transport components such as poplar pipes and windchests (the wooden boxes that store the organ’s pressurized air), the man on everyone’s mind was the Rev. Professor Peter J. Gomes, who died on Feb. 28.

“King of instruments, queen of our affections, for this we give thanks … for all the minds and hearts who have inspired this, and for Peter, and his loving grace and fortitude and faithfulness, who has brought this day to us, thanks be to God,” said Dorothy A. Austin, the church’s associate minister and chaplain to the University, during a brief blessing on the church steps.

Gomes, the driving force behind the acquisition of the new organs, would have been thrilled to see his dream come true, agreed many in attendance.

“I know that he is looking down and really smiling at us,” said Jones.

Once the organ is installed, the work has just begun. Tuning the instrument for the church space will take about eight months. The organ’s debut is scheduled for Easter Sunday, 2012, and will be followed by a series of concerts, including a performance during the Arts First festival sponsored by Harvard’s Office for the Arts in May.

A group of documentary filmmakers was also on hand to capture the arrival of the organ’s first parts for their film involving C.B. Fisk and the importance of the mechanical tracker organ in American music.

“The film is going to be dedicated to both C.B. Fisk and Reverend Gomes,” said one of the filmmakers, Pam Pacelli Cooper.