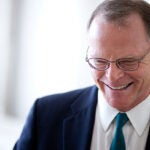 The one, indispensable book

The 2011 Elliot Norton Awards, presented on May 23 at the Paramount Theatre in Boston, honored the American Repertory Theater (A.R.T.) with six awards in the Large Theater category.

Thomas Derrah received the Outstanding Actor Award for his performance in the one-man show “R. Buckminster Fuller: The History (and Mystery) of the Universe,” which ran in January and February at the Loeb Drama Center.