When traditions gave way to war 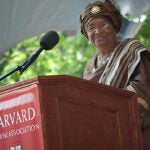 20 members of Class of ’41 attend their last organized reunion

When the Class of 1941 entered Harvard, the University still had a full-fledged polo team (now a club), which was a favored destination for future Army officers enamored of the cavalry. There was also an annual freshman smoker in Memorial Hall. In May 1938, 1,000 students from the class attended a performance by circus giant Jack Earle, adventurer Frank “Bring ‘Em Back Alive” Buck, and bubble dancer Sally Rand. She kept her clothes on, and delivered a lecture called “How To Be Intelligent Though Educated.”

Last week (May 25-26), during the 70th class reunion, there were no adventurers or burlesque dancers on the program.  But 20 members of the class did return, often with their children and grandchildren. There was plenty of discussion, and that was bittersweet too. (At Harvard, the 70th is the last class anniversary officially celebrated.)

In the diversified class were two ministers, a lumber executive, a professor of surgery, two scoutmasters, and an antiques hobbyist. All had retired long ago. There was a political scientist, who in his younger days traveled the world for the United Nations. Also on hand was a onetime Time magazine correspondent and a State Department security expert. (He spent the first 18 months of his World War II naval service cruising the West Indies in a converted yacht.) There was a Connecticut bookstore owner — who for years had scouted the Yale football team for Harvard. There was also a biologist who was a world expert on the anatomy of turtle legs.

John Francis Ambrose ’41 was there too. When he entered Harvard in the fall of 1937, he left behind a neighborhood in Queens that had turned out en masse to celebrate his scholarship. His father was a New York City policeman with an eighth-grade education.

In those days, parents wrote letters as part of the application process, and the elder Ambrose apologized for his handwriting. “He couldn’t write profoundly,” said the younger Ambrose, who just turned 92. “But he wrote a wonderful letter.” His father died during freshman year, and to this day Ambrose remembers the late-night knock on the door to his fourth-floor room in Thayer Hall. He blames his father’s early death on years of nighttime, all-weather police duty, walking a beat on the waterfront.

On the first day of the reunion, Ambrose stood near an upstairs bar at the Doubletree Hotel in Boston. He wore a lime green summer jacket and bright yellow pants. In his hand was a tall glass of amber liquid, no ice. “I learned this in England,” he said, hoisting the glass in a toast. “I never knew what scotch was. But I’ve loved it ever since.”

Ambrose first visited England for far less enjoyable reasons. He was a 39th Infantry lieutenant with the 1st Army’s storied 9th Infantry Division, and was getting his platoon ready for the Normandy landings. Behind him was plenty of fighting. Ambrose was with the 9th — among the first American units to see combat in World War II — when it landed in North Africa in November 1942. Then came months of heavy fighting in Algeria-French Morocco, Tunisia, and Sicily.

Late in 1943, when he sipped his first scotch in England, Ambrose was a platoon leader with an anti-tank unit. Ahead of him were the Normandy landings (he reached Utah Beach on D plus 4), and combat in France, the Rhineland, Ardennes-Alsace, and Central Europe. Ambrose remembers the Normandy hedgerows, the St. Lo breakout, the Battle of the Bulge, and Hürtgen Forest, and doesn’t want to recall any of them.

“It was necessary for the country, an experience you wanted to finish,” he said. “It took a long time.” (The 9th spent 304 days in combat, had four Medal of Honor winners, and captured 130,000 Germans. More than 22,000 of its men were killed, wounded, or went missing.)

“It wasn’t until the war developed that it made me see the necessity of it,” said Ambrose, who survived seven major campaigns. “I wasn’t worried about the war until it started.”

After the war, he made a career in business, starting with Vicks VapoRub, then moving on to the rubber industry, and then settling in for a long run with a New York trade association specializing in silver — a market he still watches. He and his wife, now deceased, raised three daughters and a son.

At Harvard, Ambrose was a government concentrator who enjoyed English courses too. He remembered that poet Robert Frost lived upstairs from him at Adams House for a while and used to meet with students in the community room.

He had three older brothers, none of them college graduates. Ambrose entered on scholarships from the Harvard Club of New York City (where Chauncey D. Stillman ’29 was his mentor), and from the Price Greenleaf Fund. He worked as a cataloger at Widener Library for 50 cents an hour.

With his scotch barely touched in front of him, Ambrose remembered his freshman year at Harvard. That fall, the whole family boarded an Eastern Steamship Lines ship and sailed to Boston to drop him off. All these years later, Ambrose was back with his present-day family. He took a walk through Harvard Yard on his arrival. “It really didn’t look different to me,” he said. “People still tend to gather around the [John Harvard] statue.”