What books mean as objects 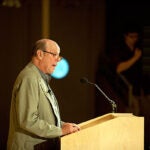 While most literature professors focus on the interpretation of texts, English Professor Leah Price wants to explore other uses to which books can be put.

“I’m interested not just in words — the verbal structure of a book — but also in the material object,” Price said. “It can hide your face on the subway. It can decorate your coffee table. It can be burnt by political opponents. And it can establish relationships between two successive readers, as when [Barack] Obama was sworn in on [Abraham] Lincoln’s Bible.”

For Price, who is a Harvard College Professor and chairs the Committee on Degrees in History and Literature, the relationship between one reader and the next can be as interesting as the relationship formed between the reader and the author. When Price was in graduate school, thinking about a book this way as a physical object was considered “fairly vulgar.”

“It was done outside the academy by rare book collectors and tended to be separated from academic discourse, which was more abstract and conceptual,” she said.

As she studied literary anthologies for her dissertation, however, Price became interested in how different aspects of classic texts are considered important in different cultural contexts and at various historical moments.

“The holy grail for literary historians is to find some copy of the text in which someone wrote beautiful, articulate, legible marginal notes. But most of the time, what you actually find is coffee spills or wax stains from reading by candlelight. That got me thinking about the interplay between reading and handling.”

In her second book, “Reader’s Block: The Use of Books in Nineteenth-Century Britain,” which is coming out this year, Price said she tried to “wrest literary critics away from the tiny fraction of its life cycle that a book spends in the hands of readers to situate it within a larger range of social practices.” One of the central issues that “Reader’s Block” deals with is what uses of books are and are not generally acceptable.

“Is it legitimate to use a book as a paperweight, to use an encyclopedia as a doorstop, to use newspaper as toilet paper, to pad out your bookshelf with books that you’re probably never going to read?” Price asked.

Price is now starting work on another book that will focus on the ways in which people think about reading today and how they think people used to read differently before the digital age.

“In thinking about new media, we measure what we do now against a nostalgic baseline. We compare the way we really do use digital media to the way we imagine we once used printed media, so that we take the reading of printed books to stand for all sorts of values we think we used to have, like sustained attention, linear thinking, noninstrumental appreciation,” Price said. “But if you just count how many pages came off of the printing press at any moment, never in any historical period have books, let alone literary works, been the majority of printed production.”

When the printing press was invented, one of its primary uses was for papal indulgences, according to Price, while in Colonial America, the vast majority of printed materials were not literary texts but advertisements, broadsides, and legal documents.

“The fact that today we tend to do more kinds of instrumental reading digitally, whereas some of us still read novels in printed form, doesn’t mean that we should imagine that the majority of the texts that were printed in the past were novels or poems. We shouldn’t make the history of the book a stick with which to beat digital media,” she said.

If you go back to the 19th century, you find conservatives denouncing reading the way they now do television. Today, our culture sees reading as a panacea. Witness the rise of bibliotherapy, or the use of books for therapeutic purposes, as Price points out.

In psychiatry, bibliotherapy is increasingly being used, not only in the sense of prescribing self-help books to patients, but also in the sense of encouraging people to form reading groups and use literary works as an indirect way of addressing issues in their own lives. Similarly, a program called Changing Lives Through Literature requires convicted offenders to attend reading groups led by English professors as a condition of their probation. Probation officers and judges also participate in the discussions.

“What was interesting,” Price said of the class that she observed, “was that it was not confessional or autobiographical, and yet the participants in the group were clearly working through issues in their own lives, for example about addiction and domestic violence … but they were triangulating through these texts.”

According to Price, issues surrounding the form and function of books, once neglected by the academy, are becoming increasingly prominent in public consciousness.

“A lot of changes in media have occurred within our own lifetimes. People my age who grew up with typewriters and graduated to giant clumsy word processors are now searching databases on their phones,” Price said. “Like it or not, we are being forced to think about the relationship between the medium and the message.”