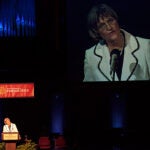 The humanities and war

Reining in fire, plants, and animals

The short version of human history might go something like this: First we were prey, then we were hunter-gatherers, then farmers — and from that came civilization.

Not quite, said James Scott, a celebrated Yale political scientist who delivered the first of the season’s Tanner Lectures on Human Values Wednesday (May 4) in Lowell Lecture Hall. In fact, he said, humankind — attached to foraging — embraced the growing of fixed crops only reluctantly, following millennia of halting and hesitation.

After all, making the transition from nature to civilization required trading a complex system of diverse nutrition and robust health (foraging) for a more regimented style of living that shortened lives and replaced leisure with drudgery (farming). Borrowing a phrase from an earlier scholar, Scott called early hunter-gatherers “the original affluent society.”

But embrace agriculture we did, eventually. It was a step that also made nation-states possible, which in Scott’s view triggered large-scale, authoritarian styles of governance that have — and still do — misguidedly control human enterprise from a central core of power.

As a result, history is littered with the utopian failures of states that use central planning to manage activities like farming, said Scott — often with murderous results. (Think of China’s disastrous Great Leap Forward, for instance, or the Soviet Union’s clumsy collectivist farms.)

Scott, invited to deliver the Tanner Lectures in their 33rd year, directs the Agrarian Studies Program at Yale and is a student of peasant politics, revolution, class relations, and anarchy.

The prestigious Tanner Lectures are delivered by different scholars annually at nine universities in the United States and abroad, the legacy of the late Utah industrialist Obert Tanner. At Harvard, they are sponsored by the Office of the President and by the Mahindra Humanities Center.

Scott has devoted decades of scholarship to investigating authoritarian governance and the coercive state projects that result, including those that are merely irritating (taxes and conscription) to those state projects that are tragic (slavery and warfare). Just the titles of his books speak volumes: “The Art of Not Being Governed” (2009), for instance, or “Seeing Like a State: How Certain Schemes to Improve the Human Condition Have Failed” (1997).

A counterpoint to these coercive states, Scott says in his scholarship, are the various “nonstate peoples” that resist dominance — outsiders of every kind, be they Berbers, bedouins or simply the homeless.

Scott began his first of two Tanner Lectures with a confession: that his books so far have failed to completely explore the oldest state project of them all — “sedentarization,” the attempt by governments of every stripe, in every age, “to assemble rural people on fixed agricultural fields,” corralling them into political bodies that never seem to quite work.

Being corralled this way is an unlikely fate for a species that spent the first 97 percent of its time on Earth as hunter-gatherers, said Scott, a lifestyle in which large-scale governance was impossible. The puzzle is “how we as a species ended up assembled in great clumps,” he said, “growing grain, tending livestock, and governed by the political units we call states and empires.”

But the Tanner Lectures were an inspiration to unravel that puzzle, said Scott, though at “breakneck speed” and without the trappings of scholarship. Today’s (May 5) lecture will be more about those states and empires, he said, but the first — on May 4 — laid out the factors that led humankind reluctantly from free, roaming lives to lives of civilization, stasis, and encirclement around the domus — the ever more important home.

That transition, over millennia, required three “world-shaping” forms of domestication, said Scott — of fire, plants, and animals. And once those three were tamed and contained, so was the fourth; humankind itself, he said, was the last of “Four Domestications,” the title of the first lecture.

Domesticating fire came first and made all the others possible, said Scott. It transformed humans from the object of prey into an emerging dominant species with a source of warmth, light, safety, and cooked food.

Cooking was a revolution that allowed Homo sapiens to reduce its gut, grow its brain, and expand its range of food sources.

Around 500,000 years ago, fire also became humankind’s “greatest tool for reshaping the natural world,” said Scott — a means of transforming land into a diverse, renewed, and fertilized landscape of berry bushes and other sources of food. Fire-blackened fields were still a long way from the grain fields and the livestock pens of a much later era, he added, but they enabled humankind to “surround itself with its needs close at hand” for the first time.

“Fire was our trump card as a species,” said Scott, and made once weak humans into “the world’s most successful invasive.”

That domesticating plants was a strategy for species success is a harder argument to make, he said. For millennia, in fact, farming was overshadowed by foraging. But population pressures helped establish the idea of deliberate crops.

In the end, farms became the locus of “fully domesticated plants,” favorite grains and fruits that were dependent on human attention, said Scott. Once humankind took “that fatal step” into farming full time, the routines required set the tempo of life itself, reshaped gender roles, and became “the very center of the civilizing process.”

Farming also brought into a tighter sphere all of the natural things humans needed to live: fire, plants, and eventually domesticated animals, which became a sort of penned game as well as renewable sources of calories like milk, cheese, and eggs. In all, farms drew “denser and denser rings around the domus itself,” said Scott, and became a means to “relocate the natural environment” at the very door of a person’s house.

The domestication of animals — in place at first about 8,000 years ago in the case of sheep, goats, and pigs — was in part made possible by grain farming. Farm animals also became “servant foragers” of a sort, said Scott, docile beings capable of eating all kinds of inedible plant matter and turning it into calories humans could use.

The same animals could “mimic the effects of fire,” he said, by clearing land, after a fashion, and fertilizing fields.

But the “Neolithic revolution” of farming came with consequences, said Scott. He outlined a grim narrative that contradicts the one we learn in school, in which the superiority of farming is “underwritten by a powerful mythology.”

Part of that pro-agriculture myth was that “no one chose to remain nomadic,” said Scott, but in fact farming for millennia just supplemented foraging, and did not replace it.

A permanent move to farming also brought increased mortality rates, smaller bodies, bone and teeth deformities, and iron deficiencies that hit women hardest. Cultivated plants were more reliable, but they were less nutritious too. Gone also were the complex sources of calories obtained by foraging, replaced by a diminished variety of grains.

In addition, farms meant greater population density, closer contact with animals, and the attendant “heaps of pests and pathogens,” said Scott — a “perfect epidemiological storm” for humans already weakened by their increasing domestication. In all, he said, civilization’s embrace of farming meant a “slow-motion plunge” from health to disease.

But there is a paradox too, said Scott; a rise in birthrates came with the rise of agriculture. The “complex reasons” for that, he promised, would be part of today’s lecture.

The second of two Tanner Lectures by James Scott — “The Long Golden Age of Barbarians, a.k.a. Non-State Peoples” — is at 4 p.m. today (May 5) at the Lowell Lecture Hall. Harvard’s Sugata Bose is the respondent, as Veena Das was for the first lecture. A related seminar is scheduled for 10 a.m. Friday (May 6) in the Barker Center’s Thompson Room. James Scott will be joined by Partha Chatterjee of Columbia University and by Harvard’s Arthur Kleinman and Lucie White.