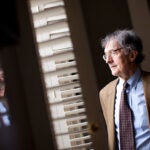 In fluent English with a soft accent, Pedro Mateo, a Harvard postdoctoral fellow in linguistics, recalled the restrictive signs plastered on the walls of Guatemalan schools in the past.

Then, as now, Mayan languages were often sadly associated with impoverished communities. School officials wanted students to speak the dominant Spanish instead, because it was considered the language of progress and prosperity.

“You didn’t want to be discriminated against,” said Mateo, adding that even for its native speakers, the Mayan language can carry a “negative connotation.”

Now with Harvard Linguistics Professor Maria Polinsky and several colleagues in her lab, Mateo is helping to preserve, promote, and better understand the ancient Mayan languages.

In May and again in June, Mateo and other members of the linguistics lab will visit Mexico and Guatemala to gather data on the grammar and the architecture of the languages Ch’ol, Chuj, and Q’anjob’al.

Expert linguists like Polinsky and her team explore language design and structure in an effort in part to understand how and why certain languages vary greatly but also resemble each other. Such work, they say, helps provide understanding about how the human brain works.

“What’s really unique to humans as a species is our language abilities,” said Jessica Coon, also a post-doctoral fellow in Polinsky’s lab, who will travel to Mexico in May. “By studying a wide range of diverse languages we can get a glimpse at the common threads that tie all language together and explore further what that tells us about cognition.”

In Central America, the Harvard crew will work with local communities to observe and record both child language and the ways that parents speak to children, which can differ significantly from how they speak with other adults.

“People often think that little kids just talk funny. But the mistakes they make are consistent and can tell us about the structure of the language they are acquiring, as well as about human language more generally,” said Coon.

A second component of their work involves “ergativity.” It’s a universal feature in Mayan languages, one that sets the standard English sentence on its head.

“Ergativity is a way of encoding who is doing what to whom in a sentence that is different than English,” said Polinsky. She offered the example of a Mayan language that might use the sentence “Me went, I bought coffee.”

“They have different ways of saying ‘I,’ ” said Polinsky, “depending on whether you use the verb ‘to go’ or ‘to buy.’ ”

In addition, most Mayan languages put the verb first in a sentence, a feature found in about a tenth of the world’s languages.

To study Mayan ergativity, Polinsky and her team developed a series of pictures created with the help of a Mayan artist that show various scenes.

In one double image, a snake bites a chicken. Next to it, a chicken bites a snake. Researchers show the images to a test subject, then play a single ambiguous recorded sentence. Next they note the subject’s preference and how long it took her to chose one image over another.

“You are asking them to identify which thing the sentence represents,” said Polinsky. “Their preferences tell us a great deal about the structure of the language.”

The Harvard team realizes there is urgency in their work.

There are 30 Mayan languages currently spoken, but experts fear those numbers are on the decline. In 1976 there were an estimated 50,000 speakers of Chuj. Now there are about 40,000.

Aside from gaining knowledge about Mayan languages and linguistics in general, the researchers also hope to give something back to their Mexican and Guatemalan host communities.

By training native Mayan language speakers who will then help them both to acquire and translate the data they collect, the Harvard team aims to inspire in the locals a sense of pride and empowerment.

“You don’t want to treat your native language consultant as a vending machine, where you put your quarter in, the sentence comes out, and you are done,” said Polinsky. “The idea is that you want to get people involved in the work you do.”

“In our experience, you can never force people’s pride in their language from the outside,” she said. “What we can do is provide this perception that their language is valuable, and if the impression is strong enough, hopefully that will help people keep it alive.”