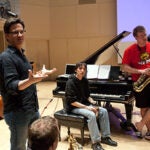 Fellows ‘poised for a year of discovery, innovation, and creation’

Just as Harvard College accepted only 6 percent of its applicants this year, so did the Radcliffe Institute for Advanced Study. A leader among institutes for advanced study, the Radcliffe Institute at Harvard selected just 51 fellows from 800 applicants for the 2011-12 year. These fellows are award-winning artists, academics, and professionals, including musicians, mathematicians, filmmakers, anthropologists, biologists, and writers who convene at the institute for a full year to focus on individual projects and research while benefiting from a multidisciplinary community in the University setting.

“These exceptional scholars, researchers, and artists are poised for a year of discovery, innovation, and creation,” said Dean Barbara J. Grosz, Higgins Professor of Natural Sciences in the Harvard School of Engineering and Applied Sciences. “As they work within and across disciplines, transformative ideas emerge during the year that have a lasting impact well beyond the fellowship itself.”

The 51 men and women were chosen based on prior accomplishments and the project they seek to undertake during their fellowship, as well as the potential of their projects to have long-term impact.

Author Chimamanda Adichie, from Nigeria, who was recently included in the The New Yorker’s “20 Under 40” for fiction, will be working on her next novel. Her books include “Purple Hibiscus” (2004) and “Half of a Yellow Sun” (2007).

University of Toronto Professor of Observational Astrophysics Ray Jayawardhana is a leader in the emerging field of exoplanetology. At the institute, Jayawardhana will apply the principles of planetary science, atmospheric physics, geochemistry, and astrobiology to the study of close-in and far-out extrasolar planets.

Journalist and commentator Diane McWhorter writes about race and civil rights. Her first book, “Carry Me Home: Birmingham, Alabama, the Climactic Battle of the Civil Rights Revolution,” won a Pulitzer Prize in 2002. As a fellow, she will work on a book that interweaves space exploration, World War II, and the segregated American South.

The range of interests of Harvard Professor of Government Eric Nelson — from political thought in early-modern Europe and America to Thomas Hobbes’ translations of Homer — make him especially well-suited to the institute’s multidisciplinary community, in which he will be working on a book about the political thought of the American Revolution.

Stanford University Professor of Philosophy Tamar Schapiro studies the nature of inclination — desire, passion, appetite — and the ways it affects practical reasoning. The focus of her fellowship year will be the study of an individual’s agency in making decisions.

Pamela Silver, a professor at Harvard Medical School and the first director of the Harvard University Ph.D. program in systems biology, studies bioenergy, metabolic engineering, and sustainability. At the institute, she will be exploring the potential for the emerging field of synthetic biology to address environmental concerns and global sustainability.

At the intersection of theory and practice is Margaret Weir, a professor of sociology and political science at the University of California, Berkeley, who also chairs the MacArthur Foundation Network on Building Resilient Regions. She will bring her focus on politics and policy to the institute with a project assessing the war on poverty.

In the decades since Frederick Wiseman’s groundbreaking documentary “Titicut Follies” was released in 1967, he has made more than three dozen documentaries — most recently, “La Danse.” Each documentary is a powerful combination of minimalism and artistry. During his year at the institute, he will work on a film about public higher education in the United States.