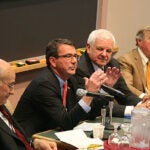 Nuclear threats, then and now

As a professor in the Department of Romance Languages and Literatures, Alice Jardine believes passionately in the value of studying abroad.

“There are all the clichés, but it’s really impossible to describe how studying abroad changes one’s perspective on one’s life and the world’s issues,” Jardine said.

Two years ago, she was approached about running a summer study program in France. She accepted and brought on Loren Wolfe, a doctoral candidate in French literature, to help craft the program.

“We sat down at my dining room table and asked ourselves: If we were sophomores or juniors at Harvard, what would we want?” Jardine recalled. “And the obvious answer is: We would want to get to know Paris really, really well.”

The eight-week course, which they launched last year and will lead again this summer, is structured so that students discover all 20 Parisian arrondissements. Titled “Paris and Its Revolutions,” the course explores not only the political revolutions that marked French history but also social, artistic, and scientific revolutions through the lens of specific Parisian locales. Each afternoon, students take to the streets to discover a new arrondissement, before coming to class to discuss their findings and impressions the following morning.

The hands-on approach lends students a more vivid understanding of French intellectual life. For the Fifth Arrondissement where the Sorbonne is located, for example, conversations around public education gave way to discussions about immigration in France, while the Seventh Arrondissement afforded the opportunity to discuss Impressionism. During the session devoted to author Simone de Beauvoir, students went to visit her tombstone in the Cimetière de Montparnasse and sat at her table at La Coupole, where they talked to waiters who had worked there since her time.

For Jardine, the most exciting unit last summer was the 12th Arrondissement, where the former Vincennes campus of the Université de Paris was located.

“It was the place where all the French intellectuals you ever heard of taught. And it was very poor, so it was truly radical chic,” she said. “You sat on the floor in the dust, but that was Gilles Deleuze talking about [Edmund] Husserl, so you stayed and you listened.”

When the campus was bulldozed in 1980, it disappeared virtually. Even today, it cannot be found on maps, and no commemorative plaque marks the site. In order to retrace its whereabouts, students asked an elderly couple, who eagerly led them through fields and into the woods to a junk pile where the buildings had been.

“They felt like they had done something really original,” Jardine said, adding that “by the end of the summer, they knew Paris in a way that most tourists never do.”

At the end of the eight weeks, students presented final projects, which also required them to discover lesser-known parts of the city. One student traveled every inch of the Paris Métro to make a documentary about the local transportation system, while another explored the up-and-coming Canal St.-Martin area.

“Through classroom sessions, language tutorials, and presentations, I not only honed my language skills, I also experienced cultural and historical immersion,” said College junior Peter Grbac, who was in the program last year and has returned to Paris to study abroad this semester. “Understanding the profound effects of the different revolutions in the context of the 20 arrondissements brought history to life.”

Many of Jardine’s own most formative experiences took place when she discovered Paris for herself in the 1970s. She first visited the City of Lights in the spring of her junior year at Ohio State University as part of a multicity study abroad trip. After graduating from college, she returned to France in 1973 on a Fulbright fellowship to teach at a lycée.

“I got it into my head that I was going to knock on Simone de Beauvoir’s door,” she said. “And I did. And I learned about the women’s movement through her.”

A few years later, when she was in graduate school at Columbia, Jardine was selected to participate in an exchange program with the École Normale Supérieure.

“I had another kind of Beauvoir moment where I got very stubborn and I said if I’m going to be the Columbia exchange student, I’m going to the main campus on the Rue d’Ulm. I didn’t want to go to the Sèvres campus where all the women went.”

Jardine successfully enrolled, becoming the first female student at the historic Rue d’Ulm campus and even insisting on living in Samuel Beckett’s old room. These personal experiences contributed to her commitment to encouraging meaningful study abroad opportunities at Harvard.

“I think studying abroad allowed me to become a citizen of the world before that became a goal for young people in this country, and I value that more than anything else in my education,” she said.