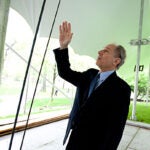 Bringing up the rear

‘Ingenious research’ on thesis is cited

The Radcliffe Institute for Advanced Study has named Matthew Smith Miller winner of the 2011 Captain Jonathan Fay Prize for his interdisciplinary work and extensive research for his thesis, “Surely His Mother Mourns for Him: Africans on Exhibition in Boston and New York, 1860-1861.” In the thesis, Miller traced the history of an exhibition of five South African men in Boston and New York — and explored the layers of complexity and context involved.

The Fay Prize is awarded annually to the senior who has produced the most outstanding imaginative work or original research in any field. Candidates are chosen from the Thomas T. Hoopes Prize winners for outstanding scholarly work or research.

“My thesis began with a discovery in the Massachusetts Historical Society of a pamphlet describing an 1860 exhibit of the ‘Aborigines of South Africa.’ It caught my imagination and I wanted to contextualize it and the references it made to 19th century anthropology and life in Boston,” said Miller, whose concentration is history and literature.

That moment of discovery led to an exhaustive investigation of primary sources, including newspapers, paintings of South Africa, maps, soldiers’ travel narratives, and posters and representations from the Harvard Peabody Museum and Houghton Library.

“Miller’s ingenious research plumbs the depths of primary sources, and his beautifully written thesis contributes to our understanding of African and American history, demonstrating the unique rewards of multidisciplinary work,” said Barbara J. Grosz, dean of the Radcliffe Institute for Advanced Study and Higgins Professor of Natural Sciences in the Harvard School of Engineering and Applied Sciences.

Throughout his thesis, Miller provides scholarship on American images of savagery in civilization, ethnological show business, and insights about how individuals act as they establish themselves in the world — whether young African men or Americans staking their dreams on a museum exhibition.

“Miller demonstrates exemplary independence and skill in researching and investigating sources to compose a remarkably compelling narrative and wholly original work of scholarship,” said Miller’s adviser, Lisa Brooks, assistant professor of history and literature and of folklore and mythology. “He skillfully draws on a multitude of scholarly approaches, ranging from post-colonial studies and performance theory to American and African studies.”

Miller, who will travel to South Africa in September to serve as a photographer for Grocott’s Mail, South Africa’s oldest independent newspaper, said, “This award is an incredible honor, and a humbling one, especially given Radcliffe’s commitment to excellence and innovation.”