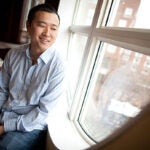 Work by day, write by night

Five faculty members have received Harvard College Professorships in recognition of their dedication to undergraduate teaching.

They teach an array of subjects: mathematics, biology, philosophy, English, and anthropology. But they share a common trait. Each is dedicated to ensuring that the students under their tutelage get the opportunity to grow as people, to learn and develop a passion about a subject, and to understand that subject in the context of a complex, fast-moving world.

The five are Leverett Professor of Mathematics Benedict Gross, Agassiz Professor of Zoology Farish Jenkins, Rabb Professor of Anthropology Arthur Kleinman, Cabot Professor of Aesthetics and the General Theory of Value Elaine Scarry, and Samuel H. Wolcott Professor of Philosophy Alison Simmons. Their selection was announced by Faculty of Arts and Sciences Dean Michael D. Smith on May 3.

“Harvard is an institution of truly great teachers,” Smith said. “Each year, it is a pleasure to recognize great scholars like Benedict Gross, Farish Jenkins, Arthur Kleinman, Elaine Scarry, and Alison Simmons for their pedagogical excellence.  As Harvard College Professors, they are made visible to their colleagues as rich sources of insight and experience.”

The Harvard College Professorships are five-year appointments, begun in 1997 through a gift of John and Frances Loeb. They provide extra support for research or scholarly activities and a semester of paid leave or summer salary.

The faculty members said they were honored by the award, with some saying it will spur them to continue to earn it in the classroom and others saying it is good to be recognized for something they love doing.

“No honor could give me greater pleasure, given the value I place on teaching and working with students,” Scarry said.

Understanding themselves
Harvard students are at a time in life where they’re figuring out what they believe about the world around them and their place in it. As a philosopher, Alison Simmons said her job is to challenge the assumptions and beliefs that students have when they arrived at Harvard.

“They may leave Harvard endorsing the same beliefs they came here with, but if they do so reflectively and for reasons they can articulate, then I’ve done my job,” Simmons said. “So I try to take my students seriously, but not take myself too seriously.  My job isn’t to turn my students into images of me, but to help them become who they are.”

Half a billion years of life forms
For Farish Jenkins, covering 500 million years of vertebrate evolution in 26 lectures is an improbable undertaking. He can introduce students to the panorama of vertebrate history as well as demonstrate how knowledge about vertebrate evolution itself continues to evolve. Most important, he said, is conveying his own excitement to students, with the hope of igniting their own curiosity about animals, living and extinct.

“I don’t ‘teach’ the subject in the sense that this is some kind of drill, an end point to be reached of encompassed knowledge,” Jenkins said. “At my best, I can excite, intrigue, and ignite curiosity, because these are my genuine feelings. I don’t always succeed — it’s too easy to become mired and then crippled by minutiae — but when I do succeed, then I’m teaching.”

An intrinsic beauty
Mathematics has an intrinsic beauty to Benedict Gross, which he tries to convey to undergraduates in several courses each year. As he teaches, he’s mindful that some students may never take another math class. With them in mind, he designed the General Education course “Fat Chance” with his colleague Joe Harris, to help students who’ve taken not much more than high school algebra understand probability and statistics. For the more serious students, who Gross said, “would break through a concrete wall to do mathematics,” he tries to convey his own appreciation of the subject.

“The structure, the beauty, the coherence, the long lines of thought,” Gross said. “More than any other discipline, mathematics is a world of its own.”

Theory into practice
To Arthur Kleinman, a medical anthropologist who teaches both undergraduates and graduate students in the Faculty of Arts and Sciences as well as students at Harvard Medical School, teaching is incomplete without a connection to the real world. He describes one of the world’s major challenges, global health, as “a bunch of problems in search of a theory.”

Theories to understand the problems of global health exist in anthropology, the social sciences, and the humanities, disciplines that together help scholars understand people and societies, Kleinman said. It is there that students are exposed to concepts like the unintended consequences of social action, and how suffering is a social problem as well as an individual issue. Both of those concepts lend greater understanding when facing problems of health in situations of poverty.

“For me, it’s a seamless connection between theory and practice,” Kleinman said. “I view knowledge creation as requiring translation to the real world. I’m very committed to making that translation with and for my students.”

A close reading, from poetry to law
Elaine Scarry lectures and teaches seminars covering various authors and genres, such as poetry and the novel. One of her favorites is “Philosophy and Literature: The Problem of Consent,” in which she guides the class through a range of readings, from Homer’s “Iliad” to the ratification debates that raged over the U.S. Constitution. The course emphasizes that consent and the withholding of consent will be crucial to every path in life.

In addition to her classroom interactions with students, Scarry said she enjoys mentoring students across years, and getting to know not only people but also their scholarship.

Ultimately, Scarry said, she hopes students leave her classes loving literature, as many do when they arrive, and with a sense of its formal elements. She also hopes they leave with a skill at reading analytically that will serve them well in other endeavors, whether further literature classes or in other fields entirely, such as law.

“The ability to close read, whether a legal document, a medical text, or a novel, is at the heart of being educated,” Scarry said.