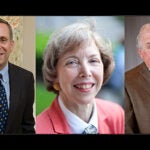 Each year, the Graduate School of Arts and Sciences (GSAS) celebrates the achievements of a select group of Harvard University’s most accomplished alumni by awarding the Centennial Medal, the highest honor that the GSAS bestows. It was first awarded in June 1989, on the occasion of the 100th anniversary of the founding of GSAS.

Centennial medalists are alumni whose contributions to knowledge, to their disciplines, to their colleagues, and to society at large have made a fundamental and lasting impact. Medalists are invited to attend the Honorands’ Dinner, given for the University’s honorary degree recipients, and to join other dignitaries on stage during Commencement’s Morning and Afternoon Exercises in Tercentenary Theatre and during the GSAS Diploma Awarding Ceremony in Sanders Theatre.

This year’s medal is being awarded on May 25 to a leading international scholar in mathematics, a well-traveled space scientist, a former university president who epitomizes grace under fire, and a historian who paints America’s past in vivid strokes.

Solving the big problems
Heisuke Hironaka (Ph.D. ’60, mathematics) is one of the premier mathematicians of his time. He achieved worldwide fame in 1964 for “Resolution of Singularities,” his solution to a central problem in algebraic geometry. In 1968 he became one of the first Japanese professors appointed at Harvard. He was awarded the Fields Medal in 1970. Hironaka is one of the most widely known and acclaimed scholars in Japan, where he has had a broad influence on society and education. He became a celebrity after he was presented with the Order of Culture Award by the emperor in 1975, an honor he shares with conductor Seiji Ozawa. Between 1977 and 1991 Hironaka wrote or co-wrote 26 popular books on topics including discovery in science, education of children and young adults, creative thinking, and mathematics; he has been consistently interested in encouraging interest in mathematics among young people. After positions at Brandeis and Columbia universities, Hironaka joined the Harvard faculty in 1968. He later held a joint professorship at Kyoto University, and went on to become director of the Research Institute for Mathematical Sciences in Kyoto from 1983 to 1985 and president of Yamaguchi University from 1996 to 2002. He also played an important role in founding the international Kyoto Prize, which since 1984 has been awarded annually in advanced technology, basic sciences, arts, and philosophy. Hironaka continues to be active in mathematical research and is currently working with groups in Spain, China, and Korea.

Trailblazing in the next frontier
Jeffrey Alan Hoffman (Ph.D. ’71, astrophysics) is professor of the practice in the Department of Aeronautics and Astronautics at the Massachusetts Institute of Technology (MIT). Hoffman started his career as a postdoctoral fellow at the Smithsonian Astrophysical Observatory, after which he worked on the research staff of the Physics Department at Leicester University in the United Kingdom and at MIT’s Center for Space Research. He was a NASA astronaut from 1978 to 1997, making five space flights and becoming the first astronaut to log 1,000 hours of flight time aboard the space shuttle. In all, he logged 21.5 million miles in space. Hoffman performed four spacewalks, including the first unplanned, contingency spacewalk in NASA’s history (STS 51D; April 1985) and the first repair/rescue mission for the Hubble Space Telescope (STS 61; December 1993), for which he gained wide appreciation. Following his astronaut career, Hoffman spent four years as NASA’s European representative. In August 2001, he joined the faculty at MIT, where he teaches space operations and design and space policy. Hoffman is also director of the Massachusetts Space Grant Alliance, responsible for statewide space-related educational activities designed to increase public understanding of space and to attract students into aerospace careers. His principal areas of research are advanced EVA systems, management of space science projects, and space systems architecture.

Leadership in crisis and in calm
Richard Lyman (Ph.D. ’54, history) is president emeritus and the J.E. Wallace Sterling Professor of Humanities emeritus at Stanford University. He joined the Stanford faculty in 1958 and held positions as professor of history, associate dean of the School of Humanities and Sciences, and vice president and provost before serving as president of Stanford from 1970 to 1980. During the Vietnam War years, as students at Stanford and around the country rallied against the war, Lyman was at the forefront of efforts to limit campus unrest and prevent violence; he is credited on campus with having “saved Stanford.” From 1980 to 1988 Lyman was president of the Rockefeller Foundation, and from 1988 to his retirement in 1991 he was the founding director of Stanford’s Freeman Spogli Institute for International Studies. Lyman has served as a director of the Council on Foundations and chaired the board of Independent Sector; he is also a past chairman of the Association of American Universities. He served as a director of IBM Corp. and Chase Manhattan Corp., and as a member of the board of the World Affairs Council of Northern California and the Association of Governing Boards of Colleges and Universities. He is a member of the American Historical Association and the Council on Foreign Relations. He holds seven honorary degrees; is a fellow of the American Academy of Arts and Sciences and of the Royal Historical Society; is a member of the American Philosophical Society; is an honorary fellow of the London School of Economics; and is an officer of the French Legion of Honor.

Painting U.S. history in vivid hues
Nell Irvin Painter (Ph.D. ’74, history), a groundbreaking historian of the United States who emphasized the experiences of African Americans, women, and the working class as a vital part of America’s past, is the Edwards Professor of American History Emerita at Princeton University. In addition to her earned doctorate from Harvard, she has received honorary doctorates from Wesleyan, Dartmouth, the State University of New York-New Paltz, and Yale. A fellow of the American Academy of Arts and Sciences, Painter has also held fellowships from the Guggenheim Foundation, the National Endowment for the Humanities, the American Council of Learned Societies, and the American Antiquarian Society. She has served as president of the Organization of American Historians and the Southern Historical Association. A prolific and award-winning scholar, her most recent books are “The History of White People,” “Creating Black Americans,” and “Southern History Across the Color Line.” As a public intellectual, Painter is frequently called upon for lectures and interviews on television and film. She is currently a graduate student in painting at the Rhode Island School of Design and will receive her M.F.A. in June.