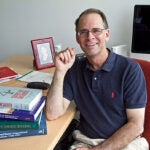 The peregrine falcon can reach a speed of more than 200 miles per hour. The legendary cheetah can reach 70. We mere humans can hit 27 mph, and if anyone could accomplish that it’s Claire Richardson ’11. She can dash 1,500 meters in a smidge above four minutes.

A runner since middle school, Richardson said she’s an athlete who’s never satisfied, but one thing she’s certainly pleased about is receiving her Harvard diploma this month.

Richardson is an unusual example of what happens after college athletes graduate. Rather than throwing her hands up in defeat, Richardson is headed off to Georgetown University for graduate school, carrying an undying love of running with her.

Because of a stress fracture she incurred last fall, Richardson has one season of NCAA cross-country eligibility that she can use in a fifth year. “The Ivy League is a bit picky about these rules, so they kick all student-athletes out after four years, meaning that any Ivy League athletes with extra eligibility have to use it outside of the Ivy League,” explained the St. Paul, Minn., native and history of science concentrator. She plans on using her eligibility while at Georgetown, pursuing a master’s degree in either social and public policy or religion.

In her track and field career at Harvard, Richardson earned all regional cross-country honors in 2007, 2008, and 2009. In September, she was second overall at the HYP Meet, turning in a career-best 5K time of 17:20.

Once Georgetown’s cross-country season ends, “I plan to continue training in Washington, D.C., and competing unattached during the spring season,” she said. “After next year, all options are open. We’ll see where my fitness and career take me! No matter what, running will always be a part of my life, and once I’m done competing on the track, I’ll definitely move on to road and trail races.”

Richardson said there is much to love about running: “First, it allows for moral development by making you fight your mental demons and doubts.”

“Second, the feeling of running on a trail in the middle of the woods, being powered by my own energy and body, is absolutely freeing, an experience for which I don’t depend on anyone or anything else. And the bond that I feel with my teammates when we suffer, fail, and triumph together is priceless, and has given me many of my closest friends.”

This June, Richardson will travel with the track team to England for the Harvard-Yale/Oxford-Cambridge meet. Anyone who qualifies out of the Harvard-Yale meet this spring goes along for the paid trip. After that, Richardson plans to spend a few months in Colorado Springs, Colo., running and doing odd jobs until school starts next fall.

Richardson looks forward to watching Harvard track and field continue to improve after she graduates — but her most treasured memory of running is outside of competition.

“Every Sunday we go to Walden Pond for long runs, where there are miles and miles of wooded trails. My favorite run of the week is this long run, when I’m in a group with a bunch of my really good friends, and we start to push the pace as we near the end of our run, flying through the forest and hopping over rocks and branches. No one is watching us, and it doesn’t matter how we perform, but we’re still there, pushing each other to be better in the quiet and beautiful wooded setting,” she said.

“This particular experience sums up what’s really important to me about this sport and my team: the communal pursuit of improvement for our own satisfaction.”