A world traveler, at work 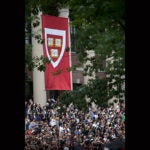 What you need to know

Although he grew up in the United States, his father comes from Ghana and his mother from Gambia, both in West Africa. Ashigbi himself has lived in big Northern cities — New York and Cleveland — and the small Southern town of Tyler, Texas. The Quincy House senior said it proved a bit jarring to visit Sierra Leone last summer.

“Having a toilet that flushes or water that runs is not a reality in a lot of places,” he said of the country, which, like his parents’ birthplaces, is also in West Africa. “Furthermore, there are stark differences within the country. The capital, Freetown, is much more developed than the villages, where many people don’t have much more than a change of clothing. The poverty permeates every facet of life.”

As a member of Students Taking on Poverty (STOP) and the African Development Initiative (ADI), Ashigbi has spent much of his Harvard College career trying to make a difference for people in places like Sierra Leone. His work has helped to improve public health and business opportunities in Africa, and has given him and his classmates a chance to explore different approaches to education reform here in the United States.

Last summer’s trip to Africa gave Ashigbi the opportunity to help on the ground, distributing mosquito nets to families at risk for malaria. At Harvard, Ashigbi had helped STOP to raise money for the project, which was administered by the nonprofit NGO GMin.

“We threw a party on campus and called it ‘Bite Me,’ ” he said. “We also targeted parents and alumni who had been involved in poverty elimination in the past. GMin used the money for bed nets in a series of villages in the south of Sierra Leone. The goal was to get a net in every sleeping space for families with a child under 5 years old. They achieved 100 percent coverage in the area.”

The trip also helped to administer a microfinance project organized in partnership with GMin and ADI, a nonprofit organization run by Harvard faculty, students, and alumni to promote sustainable African development locally. Ashigbi helped to raise funds and manage the program, which made small loans to local farmers and merchants in need of capital.

“When we asked the farmers there what they needed to improve their lives, they told us, ‘I don’t have the tools to expand,’ ” he said. “They wanted to buy pest- or weather-resistant seeds, or even a tractor, but they didn’t have the money. They were stuck. So we thought that some access to financial services might be beneficial.”

Ashigbi spoke with village elders about how best to implement the program. Based on these conversations, ADI structured the loans in a way that corresponded to the business activity for which people borrowed.

“Farmers can only repay the loan when they sell crops, he explained. “In midseason, they don’t have any other forms of income. So we structured the loan program so that the principal would be due when they sold. We tried to set it up to mirror the ways that people lived their lives.”

In the end, ADI dispersed about $1,000 in loans. Though the amounts and the numbers of borrowers were small, the repayment rate was high: 90 percent. As a result, ADI is now recycling the funds for a second round of lending.

Ashigbi has also been involved in fomenting change locally. Last year, he and a classmate developed Breaking the Mold, a two-week winter break course that brought together Harvard freshmen and sophomores, philanthropists, teachers, scholars, and others to discuss approaches to education reform in the United States. Students visited local schools to observe and learn from teachers and administrators, then returned to campus to debate what works and what doesn’t in education. He said the group marveled at the “achievement-focused” culture of one school. At another, they lamented the difficulty teachers had in getting students to pay attention. Even at troubled schools, though, Ashigbi said he saw plenty of dedication and skill in the classroom.

A government and economics concentrator, Ashigbi credits Harvard with giving him access to the resources and knowledge he needed to make a difference. He said his studies have “pushed the boundaries of my knowledge in development and poverty issues, and also formed my worldview.”

After graduation, Ashigbi will head to Bain & Co., a leading strategy consulting firm. Before then, however, he will return to Africa to wrap up his microfinance work. In the long term, his goal is to bridge the gap between these two worlds as well.

“My function at Bain will be to use data to generate insights and attack business problems,” he says. “I’ll probably be working 70 hours a week, but I hope to be involved [in anti-poverty work] as much as I can.”