A walk through forests — without rain 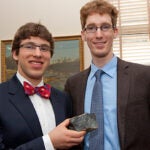 People aching to get outdoors during this soggy New England spring can discover a little outside inside at the Harvard Museum of Natural History (HMNH), which has opened a permanent exhibition on one of the region’s premier outdoor destinations: the New England forest.

Funded with the largest donation in the museum’s history, the exhibition highlights three faces of the region’s woodlands: the forest primeval (complete with black bears and long-gone caribou and wolves); the transitional forest (cleared and farmed but being slowly given back to the trees); and the New England wetland habitat (complete with moose and invasive Eurasian water milfoil).

The presentation takes the place of the longstanding Holarctic exhibition and is the latest hall at the museum to replace its taxidermied specimens with a more modern presentation and treatment.  The renovation even brought to light a bit of the old museum, because the original wooden floor — now gleaming — had been under layers of wood and carpet.

James Hanken, Agassiz Professor of Zoology and director of the Museum of Comparative Zoology (MCZ), said the new exhibition is unusual in that it brings together elements from all three of the research museums that underlie the Harvard Museum of Natural History: animals from the MCZ, plants from the Harvard University Herbaria, and rocks and minerals from the Mineralogical and Geological Museum.

“One hundred years ago, [New England’s forests] were cut down; they were all farmland,” Hanken said. “Today, it’s a paradoxical situation, with a biodiverse, rich region next to one of the most densely populated areas of the world. … As the forests have re-grown, they’ve sucked up tremendous amounts of carbon. It’s an extremely important asset now.”

Hanken and HMNH Director of Exhibitions Jan Sacco said the multimedia displays that tell the forest’s story are designed to be updated as new research enriches understanding of the forests and the organisms that live there. The multimedia displays cover a host of topics, including wetlands, fungi, old-growth forest, lichens, succession from field to forest, and the changing forest.

The exhibition also showcases specimens that have been in the museum’s collections for some time — moose, caribou, wolves, foxes, skunks, porcupines, hawks, woodpeckers, and others — and includes new displays that use the latest materials. The human impact on the ecosystem is also represented, as are invasive species, such as coyotes, that are part of the modern forest landscape.

Exhibit fabricators used latex molds to re-create the rough bark of tree species that stand as pillars in the gallery, re-created the lichen-covered rocks of a tumbled stone wall, and incorporated specimens from the Harvard Herbaria of trees from each New England state.

The exhibition, which opened Saturday (May 21), sits in the new Zofnass Family Gallery, named in honor of the donor, Paul Zofnass, whose gift made it possible. The $500,000 gift, given in 2009, is the largest in the HMNH’s history. Zofnass, who attended a members’ opening on Thursday (May 19), said he is passionate about the environment and hopes that visitors will leave with a greater understanding of the interrelated workings of the forest, appreciation of its complexity and beauty, and inspiration to work toward conservation.

Zofnass, who graduated from Harvard College in 1969 and from the Business School in 1973, remembers coming to the museum as a child, and said that with the thousands of schoolchildren and other visitors who visit each year, the exhibition has a chance to have an impact.

“I grew up here, I love the forests, and walking through the woods,” Zofnass said. “What we’re trying to do is not just show all the species and how different they are, but also how they’re related to each other. They form a whole, and it’s the interactive processes between these species that I find exciting.”

Exhibition organizers echoed Zofnass’ desire, saying that, unlike a presentation on a tropical rainforest or other ecosystem, the New England forest exhibition will teach people about the trees, lichens, and animals right outside their doors, where they can easily explore. To further that educational goal, the museum will host a companion lecture series this fall.

Noel Michele Holbrook, the Bullard Professor of Forestry, worked on a multimedia presentation about the inner workings of plants that she said seeks to educate people about the dynamic processes going on behind a forest’s still façade. Even though their activity may not be visible, plants are always responding to their environment, drawing nutrients and water from the soil, transporting them internally, performing photosynthesis, and releasing water vapor through openings in their leaves.

“This is a fantastic opportunity to educate people’s eyes to the world around them,” Holbrook said. “I want people to have a better understanding that trees are not just the backdrop of the forest. We hope they’ll go out and see more than a wall of green.”