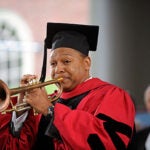 Lessons from a master

Fosberg’s 'Incognito' a story of race and family

He didn’t find out about the African American part until he was a grown man.

“My biological mother and adoptive stepfather raised me in a suburb just north of Chicago, and when they announced they were divorcing, while I was in my early 30s, I realized I knew nothing about my biological father whom my mother had left when I was just a baby,” he explained.

So he tracked down his biological father, who informed Fosberg in that first, nervous phone call that he was black.

“I was certainly shocked,” said Fosberg, “but not a shock of unacceptability, more of ‘Oh, my God, I knew this’ … or at least had a sense of this my entire life. I just never had the proof.”

His life was changed forever. He tells his story all over the country in his one-man play, “Incognito,” which he’ll perform April 6 in Boylston Hall in an event hosted by the Du Bois Graduate Society, a student organization at the Graduate School of Arts and Sciences (GSAS), and co-sponsored by the Office of Diversity and Minority Affairs at GSAS.

Fosberg’s father shared stories of family members who played significant roles in African-American history: a distant relation to the abolitionist John Brown; a great-great-grandfather who served in the 54th regiment during the Civil War; and a great-grandfather who was an all-star pitcher in the Negro baseball leagues.

Amazed by this wealth of new information, Fosberg was also resentful of his mother “for not having shared this vital personal identity information with me,” he said. “I had to confront her but didn’t know how while harboring all the anger I did.”

When Fosberg was a baby, he lived with his mother in a Roxbury housing project. “I was actually born in Long Beach, Calif., where my mother had run away to after leaving Boston University while she was pregnant with me and disowned by her family,” he said. “She was urged to return to Roxbury by my father and there she was — a 20-year-old, living in a tough ‘hood, in a very racially segregated city, with a black man, and disowned by her Armenian family.

“It was a dear friend who called me and helped me understand what my mother, a young woman, had gone through to raise me in Boston during the late 1950s … and I realized I could forgive her for having to make some very difficult choices at a very young age.”

In February, Fosberg published his memoir “Incognito: An American Odyssey of Race and Self-Discovery”; he has been performing his play around the country for 10 years.

“I think it’s pretty amazing that I get to practice my particular art, get to provoke amazing dialogue following each show about issues of race, identity, stereotypes, divorce, adoption, finding a father, family secrets, etc., and make a pretty decent living doing so,” said Fosberg.

“I have an amazing family, a rich family history, connections to people all across the country — both through family and through doing what I do — and, most importantly, I feel like I really know who I am and what my place is. I get to help people by being a bridge for difficult and often sensitive dialogue.”

“Incognito” will be performed in the Fong Auditorium, Boylston Hall 110, from 5 to 7 p.m. on April 6. A discussion will follow. The performance is free, but seating is limited. Please rsvp to sparsons@fas.harvard.edu.