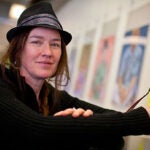 Thinking outside the gilded frame

Photographer Susan Meiselas, Ed.M. ’71, will receive the 2011 Harvard Arts Medal, which will be awarded by President Drew Faust at a ceremony on April 29 at 4 p.m. at New College Theatre. The ceremony, presented by the Office for the Arts and the Board of Overseers of Harvard College, will include a discussion with Meiselas on her career and creative process moderated by actor and host John Lithgow ’67.

Meiselas received her B.A. from Sarah Lawrence College and her M.A. in visual education from Harvard University. Her first major photographic essay focused on the lives of women doing striptease at New England country fairs. She photographed the carnivals during three consecutive summers while teaching photography in the New York public schools. Meiselas has had one-woman exhibitions in Paris, Madrid, Amsterdam, London, Los Angeles, Chicago, and New York. Her work is included in American and international collections.

The ceremony honoring Meiselas will also kick off the annual Arts First festival, which runs from April 28 through May 1. This year’s festival includes events as varied as an exhibition of artworks by Quincy House students, tutors, and masters, and a lecture performance by jazz great Wynton Marsalis.

Three plays highlight April 28: “The Story,” “Annie Get Your Gun,” and “Rock Paper Kill Me.”

On April 29, acoustic indie-pop band Asian Pear takes to the streets outside Holyoke Center, followed by the a cappella group Crimsound, the Harvard College KeyChange, the Harvard Fallen Angels, and many more.

Head to the Science Center lawn on April 30 to paint a canvas with Harvard’s Undergraduate Global Health Forum. All paintings will be donated to a children’s hospital in Rwanda.  Or visit the popular Sunken Garden Children’s Theater made up of a zany cast of undergraduates performing “The Princess and the Pea.”

For a complete listing of Arts First events. Tickets are free, but required to attend the Harvard Arts Medal ceremony, and are available at the Harvard Box Office or by calling 617.496.2222.