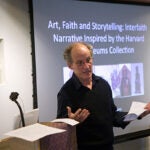 Surviving on the island, and life lessons from Hunter S. Thompson

Some people would be surprised by comparisons between the work of Charles Dickens and the time-bending, smoke monster-raging, castaway-warring, megahit TV series “Lost.” But Carlton Cuse ’81 doesn’t think it’s a stretch at all.

For the show’s co-executive producer, the two share a fundamental ability to engage their audience with a key ingredient: a compelling story. In Dickens’ case it was through his weekly newspaper serials; Cuse used his weekly multimillion-dollar production.

“With serialized storytelling you achieve a richness and depth,” said Cuse, adding “Storytelling, in whatever artistic form, is really the most powerful way we have of communicating our experiences with each other.”

Cuse offered his perspective at a talk sponsored by Harvard’s Office for the Arts’ (OFA) Learning from Performers program on Friday (April 15) at the New College Theatre.

His first foray into film came via the 1980 movie “Airplane!” When Hollywood executives arrived at Harvard to solicit feedback for the film, Cuse helped arrange a screening at the Science Center. The experience piqued his interest and on the advice from one of the Paramount executives who suggested he try to make a film as a way to get started, Cuse created a documentary about Harvard’s crew team with help from an OFA grant. The network TBS picked up the film and Cuse was on his way.

But the love of writing and reading was always key for Cuse, who also served as one of the head writers of “Lost” through its six seasons. Works like “The Chronicles of Narnia,” and books by John Steinbeck, J. D. Salinger, and Kurt Vonnegut, were his constant companions growing up.

Hunter S. Thompson became one of Cuse’s early heroes after he read Thompson’s seminal “Fear and Loathing in Las Vegas.” Later, when the two were collaborating on the TV show “Nash Bridges,” the famous author inadvertently taught Cuse an important lesson.

Cuse recalled sitting in the back seat of a Jeep Cherokee while an inebriated Thompson sped toward a bridge and certain disaster only to swerve to safety at the last minute. Seeing Cuse’s pale face Thompson said, “Bubba, you’ve got to learn to shed your fear.”

“He was absolutely right,” said Cuse, “because to succeed as an artist or in any creative endeavor you must shed your fear … if you are not prepared to fail you will not create anything of lasting artistic value.”

The mantra applied to his experience with “Lost,” said Cuse, who got out of a deal with another studio and took a cut in pay to follow his passion and help develop the show’s pilot.

“I just couldn’t get it out of my head.”

He called the leap of faith required to work on a show everyone else was convinced would flop “liberating.”

Cuse said he and his collaborator, Damon Lindelof, started breaking TV rules, introducing a complex narrative and large and ethnically diverse cast that included characters with dark pasts. They also purposely left story lines ambiguous to allow the audience to discuss the meaning of the plot with each other.

“Every time we were supposed to go right, we asked ourselves, ‘Well what happens if we go left instead?’”

Offering a list of writing tips, Cuse urged the crowd to foster collaborations, write a little every day in order to “find a path into your subconscious,” write with conviction, and to reveal the deepest nature of a story’s characters.

It was ultimately a strong focus on character, he said, that made “Lost” so appealing to such a broad audience.

Above all, Cuse encouraged the audience to simply be creative.

“In whatever it is you do, do take the risk to express yourselves. Allow the beauty and singularity that defines you to be revealed to the world.”