From Chile to Brazil 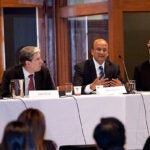 In late March, Harvard President Drew Faust traveled to Chile and Brazil to highlight the University’s engagement with Latin America. In Brazil, she reconnected with alumni, and exchanged ideas with the leaders of local universities. She met with Brazilian students who have studied alongside Harvard students or with Harvard faculty in Brazil. (Spotlight on Harvard in Brazil)

While in Chile, Faust met with government and academic leaders to get a firsthand look at the tangible benefits of Harvard research. She visited early childhood education programs in public schools and participated in a symposium organized by Harvard faculty, government leaders, and the heads of nongovernmental organizations involved in Chile’s earthquake reconstruction efforts. (Spotlight on Harvard in Chile)

“I feel fortunate to be here today to help introduce the next stage of what had already been a strong and mutually beneficial partnership between Harvard and Chile,” Faust said. “I share the hope that by working in close concert, we can better understand the public health and mental health issues arising from devastating natural disasters; that we can consider design solutions that will limit the damage done by future disasters; and that we can carry forward efforts on various fronts to advance the reconstruction efforts here in Chile.”

In the poem “In the wave-strike over unquiet stones,” Chilean writer Pablo Neruda wrote about a special spirit of renewal that is expressed in the natural landscape:

In the wave-strike over unquiet stones

the brightness bursts and bears the rose

and the ring of water contracts to a cluster

to one drop of azure brine that falls.

and returns, eternal, to being and nothingness:

Merged, you and I, my love, seal the silence

while the sea destroys its continual forms,

collapses its turrets of wildness and whiteness,

because in the weft of those unseen garments

of headlong water, and perpetual sand,

we bear the sole, relentless tenderness.