A window into college 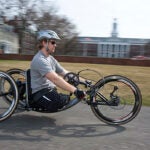 Samson Prosper, a fourth-grader from the James W. Hennigan Elementary School in Jamaica Plain, got to fly on the stage of Sanders Theatre in Memorial Hall on April 14.

Well, he did have some help. With encouragement from the Rev. John Matthews Border IV, who gave a speech about reaching far and aiming high, the 9-year-old boy took the stage with Boston Public Schools Superintendent Carol Johnson, administrators, and Harvard student Evan Covington ’12, who had welcomed the group in Mandarin just moments before. Samson took his chair. Then he stood on it.

And in front of more than 300 boys, as well as principals and teachers from 25 Boston public schools, Samson leapt into the arms of three tall mentors who flew him across the stage in their outstretched arms. Samson’s wingmen were Lt. James Jones, station commander of State Police Troop H and a Harvard Kennedy School alumnus; Jermaine Myrie, a consultant with JGM Enterprises; and Marvin Venay, executive director of the Massachusetts Black and Latino Legislative Caucus.

“It was like I was Superman,” said Samson, but the flight meant something real. Later that morning, Samson said he would go to college on a scholarship and knew how to get there. “By encouraging myself, doing what’s right, and working hard,” he said.

Samson was one of more than 300 kindergarten and fourth-grade African-American boys who came to Harvard for their first visit to a college campus. They came for the launch of Impact 300, a multifaceted Boston Public Schools program aimed at closing the achievement gap and helping to prepare the boys for college.  Harvard partnered with the Boston schools to create the half-day program, which was filled with motivational talks and provided a real taste of college life, including lunch at Annenberg Hall and small campus tours led by Harvard students and staff.

“We came to Harvard because they immediately saw the importance of this effort,” said Shonda Huery, an alumna of the Harvard Graduate School of Education and academic superintendent for Boston schools. She is responsible for the 25 schools, and she created Impact 300. “For our children this is a big moment, because Harvard is one of the most prestigious universities in the world, and I want them to know it is within their reach.”

The Impact 300 effort grew out of reports and data outlining a disparity between black and white academic and social achievement in urban schools, from cradle to adulthood. In Boston, 2010 MCAS data from the schools participating in Impact 300 showed that 61.7 percent of the boys had math MCAS scores that put them into the “warning” or “needs improvement” categories.

School administrators and principals said it was time for a strategic approach. “We’ve been dropping too many students,” said James Brewer, principal of the Mozart Elementary School in Roslindale. “First they’re flying, but then there’s a disconnect.”

Impact 300 offers a plan. “It’s a dream for me to align myself with a system that builds a pipeline for K-16 … now we have a plan that can make a real difference in our boys’ lives,” added Brewer.

But the Impact 300 boys weren’t the only local children on Harvard’s campus that day. Around the corner, at the Harvard Museum of Natural History, 30 fourth- and fifth-grade students from the Louis Agassiz Elementary School in Jamaica Plain were visiting as part of another Harvard-sponsored early college awareness and science experience on campus.

A total of 140 fourth- and fifth-graders from the Elihu Greenwood Leadership Academy of Hyde Park and the Louis Agassiz Elementary School — two of nine Boston public schools that Harvard supports through the Step UP program — got their first in-depth college experience at Harvard this month. Harvard also issues a yearly invitation to all seventh-grade classes in Cambridge Public Schools to visit campus as part of Project TEACH.

“This year roughly 700 local students will visit Harvard’s campus to attend early-college-awareness programs,” said Christine Heenan, vice president of Harvard Public Affairs and Communications (HPAC ). “You never know what will spark a young person’s interest and ignite a new sense of possibility. We try to reach young scholars through every avenue open to us — through our classrooms, our museums, our athletic fields, our students, and faculty.” HPAC coordinates early-college-awareness programs, working with a full range of University departments and groups on these programs, including the Crimson Key Society, the Harvard Achievement Support Initiative, the Harvard Museum of Natural History, and Harvard University Hospitality & Dining Services.

Ronald F. Ferguson, senior lecturer in education and public policy at the Harvard Graduate School of Education and the Harvard Kennedy School, welcomed the Impact 300 boys to campus. He also gave sage advice on finding that spark. “Your brain is like a muscle. The more you exercise it, the stronger it gets, and the better your life is. I want you to know any place in the world you’re interested in is where you should be … so think big.” Ferguson is also the faculty co-chair and director of the Achievement Gap Initiative at Harvard University.