A passion for unloving art 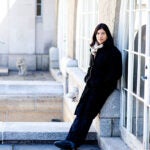 Growing up in Melbourne, Australia, Maria Gough never imagined she would become a leading authority on Russian and Soviet avant-garde art.

Gough, the Joseph Pulitzer Jr. Professor of Modern Art at Harvard, dubs the difficult, abstract field that she studies as “unloving” because “it seems at first to push you away, and you have to follow it.”

After graduating from high school, Gough dreamed of becoming a sculptor. But when she was accepted into the University of Melbourne Law School, she decided to enroll there, partly for family reasons but also to satisfy an equally strong draw toward the realm of the analytical. She was permitted to take some liberal arts courses, which she took advantage of to study philosophy and art history.

“Gradually, I just moved more and more into art history, such that I didn’t ever formally drop out of the law school; I just stopped taking classes in it,” she said.

Despite her father’s disappointment that none of his children would take over his legal practice, Gough went on to study architecture as a graduate student, applying to graduate programs in art history in the United States. When she received her acceptance from Johns Hopkins University, she hesitated at first, but once she arrived she found that she didn’t want to leave.

“I was so happy,” she recalled. “It was like being in a hothouse of wonderful people doing brilliant and creative things. I just thought we would all stay there together forever.”

Gough completed her master’s at Johns Hopkins before coming to Harvard to complete her Ph.D. Though she admits to a “weakness” for 17th century baroque painting, Gough chose to specialize in European modernism because she found its problems ultimately the most compelling. In particular, Gough said that modern art appealed both to her experiences dealing with questions of aesthetic form as an artist and to her background in law and philosophy.

“The modern period has wonderful instances of the intersection of great innovation in formal matters and major historical upsets — revolutions, trauma, major attempts at social transformation,” she said. “I am interested in what the function of the artist is in a revolutionary climate.”

Gough’s interest in the conjunction of art and politics led her to focus on Russian constructivism, in a decision that she initially resisted because of the difficulty of conducting research in Russian repositories. Yet the historical circumstances that coincided with her time in graduate school, beginning in 1987, contributed to her desire to study Soviet art.

“The spring revolution in Europe was in ’89, the Berlin Wall came down, Germany was reunified, the Soviet Union collapsed in late ’91. It was the moment,” she said. “I was interested in aesthetics and politics, and then this amazing global thing happened, and I wanted to bear witness to that firsthand.”

Thanks to a Paul Mellon Fellowship from the Center for Advanced Study in the Visual Arts at the National Gallery of Art in Washington, D.C., Gough spent two years living in Moscow, which she described as “completely lawless and deeply fascinating.”

She relished the experience.

“There was a poetry to everyday life that you don’t find in our advanced economies because we’re so organized and we don’t allow ourselves to have that,” she said. “Now, as an adult person with responsibilities and a job, it would drive me crazy. But as a student, I loved it. It was intoxicating.”

Prior to joining the Harvard faculty in 2009, Gough taught at the University of Michigan and Stanford University. One of the greatest assets of being at Harvard, she said, is having access to the Harvard Art Museums and to truly extraordinary archival and library resources.

“I like to go to archives and museums and find things and build stories about them,” she explained. “I’m interested in the fact that a work of art is both part of a historical moment and also transcends it. It takes us places where we didn’t know it would take us.”