The timelessness of war 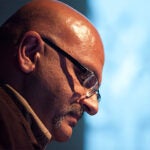 A river of concern

Members of the American Repertory Theater’s (A.R.T.) current production of “Ajax” took to the stage for another version of the Greek drama, “Ajax and Philoctetes,” delivering a tale about warriors in ancient times for an audience largely made up of warriors in modern times.

The production on Monday (March 7) was a collaboration between the A.R.T. and the arts group Theater of War on an innovative project that presents readings of the story of Ajax, the mythological Greek warrior ravaged by jealousy, violence, and shame who takes his own life. The production facilitates a town hall discussion to examine the challenges faced by veterans, service members, families, friends, and community members, all dealing with the psychological effects of war.

“It has been suggested that ancient Greek drama was a form of storytelling, communal therapy, and ritual reintegration for combat veterans by combat veterans,” said the program notes. The event at the Loeb Drama Center bore that suggestion out, as themes of shame, fear, anxiety, honor, gratitude, anger, and resentment emerged during a discussion with the audience.

A large number of military members and veterans attended the program, which included a panel of three veterans and an Army wife.

Forty years ago this month, panelist Bill Donoghue returned from Vietnam. He spoke of the horrors he experienced while serving as a U.S. Marine and of his current fear for the safety of his son, a Marine officer in Afghanistan.

“I identify with the line in the play [from Ajax’s wife Tecmessa] that says ‘twice the pain, twice the sorrow,’ ” said Donoghue, who described the “special letters” that only he receives from his son, detailing the death that he sees in combat.

“He knows I know. …That’s how that phrase in the play resonates with me.”

Panelist Gillian Sowden, a fourth-year student at Harvard Medical School, sat next to her husband Evan Bick, who was an infantry platoon leader in Iraq. Sowden described the difficulty of being separated from Bick for two years, the constant anxiety she felt, and how they had “grown in different ways while apart.”

“We had two very different years,” she said. “I’ll never fully understand his experience, and part of me doesn’t want to know his experience, because that’s a side of me I can’t quite reconcile with the man that I married.”

Many in the audience wondered how best to respond to members of the military whom they encounter in their communities. Veterans and current service members responded that what they appreciate most is sincerity and a willingness to engage.

“One of the best things is building a relationship,” said one audience member on active duty. “No one is going to give detailed information to someone they barely know. So the best thing you can do is not just say ‘thank you,’ but look us in the eye, touch us, and build a relationship with us … take time, befriend us.”

Members of the Marine Wing Support Squadron, based out of Chicopee, Mass., occupied two rows of seats near the back of the auditorium. Their commanding officer, Capt. William Lee, initially worried how they might react to the program, but his fears were put to rest when many raised their hands to take part in the discussion. It’s important to understand the perspective of the people we serve, for them to understand ours, and “to have a conversation in a setting like this,” said Lee.

Donoghue offered pointed advice about what not to say to a service member who has seen active duty, saying, “The worst question in the world is: ‘Did you kill someone?’ ” Instead, Donoghue urged people to ask open-ended questions like “Tell me about your experience.”

Ellen McLaughlin, who directed the evening’s reading and moderated the discussion, offered background for the audience. The playwright Sophocles was himself a military veteran. Athens, where the work premiered, was a military society, and the play would have been presented to a largely military crowd.