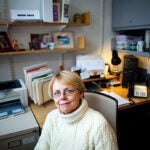 A lift before the move

Stuart T. Hauser, M.D., Ph.D., an internationally acclaimed expert in adolescent development, died at age 70 on August 5, 2008, of complications following surgery for esophageal cancer. He was Professor of Psychiatry at Harvard Medical School, Senior Scientist at Judge Baker Children’s Center, and Co-Director of the Clinical Research Training Program in Social and Biological Psychiatry. He leaves his wife Barbara (Blank) Hauser, sons Joshua and Ethan, and two grandchildren. Among his important Harvard-wide activities, he was a co-founder of the Clinical Research training program (now re-named the Stuart T. Hauser CRTP) and the Harvard Psychiatry Department Research Committee and was also the first Co-Chair of the Harvard Psychiatry Executive Committee. He was President of the Judge Baker Children’s Center from 1993-2004 and presided over its transition to the present enlarged facility. In research, he was known for his work in adolescent development and his focus on resilience to adversity. He also served as President of the Society for Research on Adolescence. Most recently, he became Professor at the Norwegian Institute of Public Health in Oslo, consulting with researchers on studies of high-risk adolescents. He was the author and co-author of more than 100 articles, 37 chapters and 8 books. He was a member of more than 10 editorial boards, including the Harvard Review of Psychiatry.

Stuart grew up as an only child under very modest circumstances in the Bronx, where his father had a small store. He excelled at Bronx High School of Science and at Antioch College, where he majored in both philosophy and physics. After two years as a graduate student at Harvard in Social Relations, he went on to Yale Medical School, , where his combined interest in science and humanities led to a research thesis on Black and White identity formation in lower socioeconomic class adolescent boys that became his first book. For Stuart, psychiatry offered possibilities to efforts to integrate his life-long interests in science and humanities. After completing his psychiatric residency at Massachusetts Mental Health Center, he spent two years in Lyman Wynn’s family research laboratory at the NIMH, followed by a decision to seek a PhD in Psychology at Harvard while simultaneously pursuing psychoanalytic training at the Boston Psychoanalytic Institute. In graduate school he met Barbara Blank Hauser, and their shared devotion to clinical work and passion for intellectual rigor and excellence laid the foundation for their lifelong bond and 44 years of marriage.

Stuart possessed an unusual ability to resonate with the feelings of others, so that students and colleagues who worked with him felt a warm and special relationship. Indeed, Stuart valued friendship enormously and went to great lengths to sustain his relationships through shared meals, letters, and phone calls. Outside of his busy professional life, Stuart found joy in mastering activities to which he had had minimal youthful exposure such as tennis, hiking, skiing, sailing, and learning to play the piano. His most relaxing times included weekend trips and family vacations in his idyllic lakeside home in Maine. On its deck, with the White Mountains in view, he engaged in wide-ranging conversations with friends and his two beloved sons, Joshua, a physician and Ethan, a writer.

His academic career was strongly influenced by the developmental theories of Erik Erikson. Stuart spent his career studying adolescent and adult identity and psychosocial development. In 1978 he began a landmark longitudinal study, Across Generations, tracking the lives of 146 normal and psychiatrically-hospitalized adolescents. A primary passion of Stuart’s throughout the next 30 years was understanding the construct of ego development—the growing capacity of the individual to integrate diverse sources of information (internal, social and environmental), balancing the needs of self and other, to move forward in the world. The match between scholar and topic was fitting, as Stuart embodied all of these capacities throughout his career. Stuart was also inherently a developmentalist. He did some of the earliest theoretical work recognizing that development could proceed along different trajectories for different individuals—and he was developing ways to capture these trajectories empirically almost a decade before the modern statistics of trajectory analysis began to have an impact on the field.

As much as Stuart was committed to understanding the development of the individual human organism, he also recognized at a deep level the profound ways in which family interactions shaped this development. Not content with the paper and pencil measures available at the time to assess these interactions, Stuart developed methods for observing family interactions in vivo, so that key qualities of family relationships could be better understood by researchers. Not surprisingly, a favorite adjective of his applied to human development was “complex”, and he continually sought a deeper understanding rather than simple, facile explanations.

His study of development was not only groundbreaking but also enduring. With original participants now in their mid-forties, the study continues, having been federally funded for most of its duration. Not surprisingly, as the study’s participants matured, and our scientific technologies developed, Stuart’s interests developed and expanded along with them. His most recent book, Out of the Woods: Tales of Resilient Teens, (co-authored with Joseph Allen, Ph.D.), explored mechanisms by which troubled adolescents are able to overcome social and psychological adversity to lead more stable and satisfying lives in adulthood. This early study of ego development and family relations now considers outcomes ranging from adult metabolic syndrome to the intergenerational transmission of relationship patterns to the interaction of genes and environment in determining behavior.

A graduate of the Boston Psychoanalytic Institute, Stuart soon became a faculty member, active on the research committee and director of the Deutsch Prize Committee (for best scientific paper) for several years. He was known as a tough reader and challenging critic, while able to be generous with time to aspiring younger colleagues. He subsequently moved his analytic teaching to the newer Psychoanalytic Institute of New England East (PINE). Throughout his career, Stuart maintained a clinical practice, and, for over thirty years, he was a member of a peer group of analytic clinicians that met monthly. He was notorious for telephoning shortly before the meeting to be reminded of the time and place, yet inevitably appeared, sometimes looking the worse for wear while recounting his immersion in grant writing and administrative tasks, to put on his clinical hat and raise his inimitable questions about hasty formulations or assumptions. Constantly looking for linkages to research data and knowledgeable about a vast range of developmental and psychoanalytic studies, Stuart could be exasperating in his unrelenting efforts to get his colleagues up to speed and in his dismissal of those he saw as rigid purveyors of doctrine. Yet he also enjoyed a good joke and could end a heated interchange by sharing a hearty laugh with the group. He played an instrumental role in creating a psychoanalytic research society open to non-psychoanalysts. During his final weeks of life, he devoted precious hours to getting the proposal for this organization circulated and responding to comments, almost as if he knew that his time was limited.

His career in Mentoring “across generations” was most clearly and memorably expressed in his work and leadership in what is now formally renamed, in his memory, the Stuart T. Hauser, M.D., Ph.D. Harvard Clinical Research Training Program (CRTP) in Biological and Social Psychiatry. This program began when Miles Shore, M.D., then head of the Massachusetts Mental Health Center (MMHC) and Harvard Department Chair, asked Stuart and Robert W. McCarley, M.D. to begin a formal post-doctoral training program for psychologists and psychiatrists through the NIMH T32 program, a funding mechanism providing salary and other support to help the career development of promising individuals. He and Bob McCarley had diverse research interests, although both were graduates of the MMHC residency and MMHC faculty members. Stuart was beginning his developmental work while Bob spent most of his time in animal research listening to the activity of neurons generating REM (Dream) sleep. They decided that, as true in their own careers, social/developmental and biologically based research each had much to offer post-doctoral trainees working in all areas of psychiatry field. So they wrote the application as a combined training program in these two domains. Stuart generously accepted overseeing the major administrative tasks in running the program, and assumed the formal roles of Director and Principal Investigator. According to our best information, this was and is the only combined social and biological NIMH training program. Moreover, the 32 years of continued function of the CRTP makes it the longest continually functioning and funded psychiatric research training program of its kind in the USA.

Over the years under Stuart’s leadership, the CRTP expanded its research resources and training sites to include all the Harvard psychiatric hospitals and research sites. The CRTP now offers 40 potential research training sites at 14 different Harvard affiliated institutions. The success of the program in training the leaders of the next generations is evident in the number of graduates who have become professors and department chairs – a further tribute to Stuart’s generativity and tenacity in successfully obtaining funding throughout the decades. Stuart would be most pleased to see the program carry on the mission he so creatively instituted and sustained.

A respected and beloved colleague, he will be greatly missed by HMS faculty, child and adult development researchers, psychoanalytic scholars, and a host of former students. In honor of his scientific legacy, the Stuart T. Hauser Memorial Fund has been established at Harvard Medical School recognizing a faculty member for outstanding mentorship of medical students, residents, fellows and junior faculty in the areas of adult and child psychiatry, human development, and psycho-social research.