Finding a sense of place 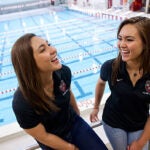 Fresh off the plane in May to begin an overseas internship, I knew nothing of the life I would be entering except for the vague recollections of history classes, faded maps, and perhaps the line or two from the movie “EuroTrip.” The immaculate cobblestones lining the streets of Geneva’s Old Town were a long way from the hustle of my hometown. Swept up in the chaos of interns overrunning the staid city, it was almost impossible to resist the infectious European carelessness, the joie de vivre, the low voices and clinks of wine glasses, infused altogether with a Swiss meticulousness and precision.

Later, after stumbling off a red-eye to New York, frantically re-packing for my Harvard classes in September, and just barely surviving my sophomore fall, I wouldn’t have been at all surprised if my roommate thought I were utterly out of my mind, delusional even, to be thinking about returning overseas. The Europe that I left behind — groaning under the weight of its cultural history — pulled at my heart just as my continuing work with the World Health Organization (WHO) demanded attention from my brain.

A week of requisite pleading with the “authorities” (read: family), email exchanges with my WHO supervisors, and a phone call to the Harvard professor sponsoring this entire experience, and I was on the next flight out of Kennedy Airport, just a day after my last Harvard final.

The familiarity, the return to the idiosyncrasies of the Swiss, kept me smiling, from boarding the plane through my confident zigzag through Geneva’s airport. “Damn it,” I almost said aloud as I saw the bus rumbling away from the stop; it would be almost 20 minutes until the next one. And I was back.

As quickly as you could say bonjour, I fell back into the rhythms of work, bagged lunches, and commuting. The WHO, which sits at the top of a hill overlooking the city and the lake, is a curious place. A Kafkaesque expanse of office cubicles, the WHO is a world unto itself, the gatekeeper to nearly all international health policymaking, and an entity that is part of, yet distinct from, the traditional United Nations umbrella. The intern experience at the WHO can be jarring. And the familiar complaints have some measure of truth. The bureaucracy is overwhelming, and the pace of progress often undetectable.

But if there is one role in which the WHO yet commands a begrudging respect, largely free from the political skirmishes that underlie its policy efforts, it is in research and information gathering. Unimaginably large volumes of research, from every corner of the world, collected dutifully by national and regional offices, flow into the Geneva headquarters and are synthesized into reports and memos.

Perhaps wisely, the niche that I carved out for myself over the summer was within this realm. Back at my desk, decorated with the same posters, running Stata, and reconciling revisions from people across the department, it was as if I had never left. “So, America, Thomas, are you ever going back?” a Swede sitting across from me asked, a few days after I had returned. The corridor was quieter than usual, as the great diaspora of U.N. employees to their home countries for the holidays was reaching its peak. I laughed and mumbled an “unclear,” getting up to grab another coffee.

“Unclear.” I repeated the word when meeting with my Harvard sponsor, a professor at the Medical School, as I reflected on my experience at the WHO and thought about where I wanted to be in five or 10 years. I had learned an incredible amount, with substantive results to show from my work, and had developed a deep rapport with my supervisors. I knew I would always be welcome if I should return. But that part of me wanting to see more of the world, to see the most pernicious of issues touched on during my stay, to always challenge and question received understandings and beliefs, kept me from providing a definitive answer.

And Europe, I could not forget Europe. Perhaps I wouldn’t return to the U.N. until I could have more impact on its operations, but I knew I would return to this continent. My January Experience challenged, but also reaffirmed, that strange affinity I had discovered over the summer, re-painting in more realistic hues the glorious warm-weather renditions of new places and people. January taught me to be a more careful and meticulous scientist, a sharper scholar; and J-term reminded me of how beautiful — and transient — a sense of place feels.

On the last day of my January Experience, after the requisite goodbyes and haphazard packing of binders and textbooks, I stood in front of the main building, staring one last time at the towering expanse of glass. And perhaps it was my imagination, but for the first time, I noticed my reflection — multiplied infinitely across the panels and windows — and had an overwhelming sense of déjà vu, as if I were home.

Cheers to Europe; and cheers to Harvard, for opening my eyes. Á votre santé!