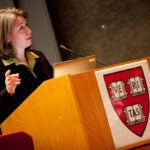 Only 39 percent of the nearly 10,000 North American plant species threatened with extinction are being maintained in collections, according to the first comprehensive listing of the threatened plant species in Canada, Mexico, and the United States.

The North American Collections Assessment (NACA) — conducted collaboratively by Harvard’s Arnold Arboretum, Botanic Gardens Conservation International U.S., and the U.S. Botanic Garden — found that only 3,681 of North America’s 9,494 most threatened plant species are maintained in 230 collections across the continent.

Although the protection of natural habitats remains the highest priority, maintaining rare species in seed banks or living collections — such as those in public gardens and conservation organizations — provides an insurance policy against future loss. Such collections have also been valuable in restoring natural populations.

“Until this point, nobody knew which rare North American plants were safeguarded in collections,” said Michael Dosmann, curator of living collections at the Arnold Arboretum and one of the report’s authors. “Perhaps even worse is that we didn’t have a clue which ones were not in cultivation. These are the species of greater priority for collection and preservation.”

“This report is a wonderful illustration of the Arboretum’s critical role in shaping the national and international agenda for the preservation of rare and endangered biodiversity,” said William “Ned” Friedman, director of the Arnold Arboretum and Arnold Professor of Organismic and Evolutionary Biology.

Assessment results indicate that North America did not reach the Global Strategy for Plant Conservation’s (GSPC) Target 8 goal set in 2002, which called for 60 percent of threatened plant species to be protected in collections by 2010. While botanical organizations across Canada, Mexico, and the United States are making progress to achieve this, the report found that 3,500 or more additional threatened plant species will need to be added to collections to meet the new GSPC goal of conserving 75 percent of known threatened species in North America by 2020. This will require nearly doubling the current capacity.

“These assessment results are hopeful, but also a call to action,” said Andrea Kramer, Botanic Gardens Conservation International (BGCI) U.S. executive director and the report’s senior author. “For many public gardens, this marks the first time their potential to assist in the conservation effort has been recognized. We hope this is a watershed moment.”

To address the need to increase capacity, the assessment calls for the strengthening of conservation networks and collaboration in conservation planning and data sharing. One solution is for institutions to contribute plant lists to BGCI’s PlantSearch database and update them regularly. It is also crucial to increase cooperation and coordination among a broad and diverse network of gardens and conservation organizations with different expertise and resources.

Reflecting on the Arboretum’s contributions to the assessment, Friedman said, “The strong emphasis on the curation of the Arboretum’s living collections, along with the many fellowships offered to train the next generation of plant and conservation biologists, was central to making this seminal study come to fruition.”

Said Dosmann: “Another one of the lessons we learned from this assessment is just how important it is to curate for conservation. Curators and horticulturists have not always considered conservation value as they go about their routines. Yet by participating in this assessment, many for the very first time saw the direct value of their plants in bolstering efforts to conserve our threatened flora. We hope this becomes a new paradigm in collections management.”

This new paradigm — fully integrating the conservation ethic into curatorial practices —stems out of recent work at the Arboretum. Its living collection is one of the world’s most diverse and well-documented assemblages of trees, shrubs, and vines. Roughly 15,000 accessioned plants are cultivated in the outdoor museum, representing some 4,000 different taxa, or kinds (e.g., species, subspecies, or cultivated varieties), from temperate regions of the world — particularly Asia and North America. While it is obvious that some of these are threatened in their native habitat, determining their conservation value is not always simple.

Why the challenge?  For one, threat rankings are assigned by many organizations around the world, and can be applied at a range of scales. For instance, the Red Lists compiled by the International Union for Conservation of Nature are at the global level, while individual countries may maintain their own. Complicating things further is that definitions of conservation status among international, national, and regional groups are not always uniform. Lastly, some rankings are unreliable because of data deficiencies.

In 2008, Dosmann hired Abby Hird as a Putnam Research Fellow to address this issue at the Arboretum.

“When I came to the Arboretum,” said Hird, who now works for BGCI U.S. and was a co-author on the report, “Michael asked me to answer one little question: ‘What is the conservation value of the living collections?’ Little did we know that it would take nearly two years to build a pragmatic conservation assessment model for living plant collections.”

Hird’s work at the Arboretum determined that when a wide net is cast (looking at threats from global to local scales) approximately 11 percent of the species growing in its living collections are threatened with extinction. This knowledge is now applied at multiple levels of collections management, from setting new acquisition targets to elevating horticultural maintenance and curatorial regimes for those plants in greatest peril.

Applying the Arboretum’s approach more broadly seemed a logical next step, and when the chance to collaborate on the NACA with BGCI U.S. and the U.S. Botanic Garden came up, Dosmann and Hird were on board. Hird, whose fellowship was just ending, went to work for BGCI U.S. yet remained at the Arboretum as a research associate.

“It was exciting to extend the collections assessment I did as Putnam Fellow to the continental scale for BGCI’s NACA,” said Hird.

And just how many of the Arboretum’s plants contributed to the NACA report?  “Forty-seven of the North American species in our collections are threatened in their native range,” notes Dosmann. “We not only will work to preserve and research these rarities, but we can set our eyes upon additional species not in our collection — yet.”