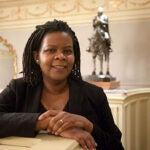 Race in America, made personal

“She loved Crackerjack. She loved the home team with all her heart,” writes Braunstein, a fiction instructor at Harvard Extension School. “She was twelve; her name was Leonora; she would disappear.”

In college, Braunstein overheard a story about a family that “perished at a train crossing — only one child survived,” she recalled. And the idea for “The Sweet Relief of Missing Children” was born.

“During this period, I saw an exhibit of Jim Goldberg’s photographs of street kids at the San Francisco Museum of Modern Art. I also came upon a Life magazine from 1967 featuring images of ragged, darkly glamorous teen runaways and their worried parents. I became interested in exploring the psychological experience of those who flee, and those who are left behind.”

Last October, Braunstein was selected by the National Book Foundation as one of “5 under 35” for 2010, and before that she was recognized by the prestigious Rona Jaffe Foundation. And like her characters, whose lives are continuously upended, Braunstein’s life might’ve taken another route.

“I grew up in a suburb of Hartford, Conn. — insurance capital of the world. My parents and stepparents at one time all worked in the insurance industry. They were always very supportive of my impulse to write, which arose early,” she said.

“They often told me that Wallace Stevens had worked in insurance — at their very company. Insurance people have a reputation for conservatism — not the sorts of people who would encourage a child to pursue something as uncertain as the arts. But in a funny way Stevens’ legend paved the way for me to write.”

Braunstein wrote her first story in elementary school. “It was called ‘Shining Eyes’ — a suburban Gothic in which a plucky adolescent heroine explores the abandoned house at the end of the street, only to see a pair of eyes shining in the shadows. She recognizes them: Her school principal!”

“Sweet Relief” likewise tortures the reader with its beauty and unrest. Braunstein’s characters are mostly children, and though their fates are uncertain, it’s her adult characters that are doubly worrying. There’s Goldie, the desperate husband-obsessed mother, and Thomas, an employee at an abortion clinic who moonlights as a peeping Tom.

Braunstein, an alumna of the Iowa Writers’ Workshop, said she is working on “a second novel and a collection on essays. And some short stories.” On top of writing and teaching, she is also a mother herself.

“I wrote most of this book before I was a mother, but becoming a mother of course gave me more insight into the profound love and terror of parenthood, the great challenges of the endeavor. And it reminded me again — though I’m not sure we ever really need reminding — of the vulnerability of childhood,” she said.

“But maybe what it comes down to is this: Our children instill greater empathy in us. And empathy is the novelist’s most important tool.”