A river of concern 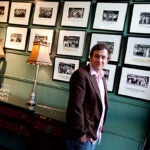 The Western world takes clean water for granted. Twenty-four hours a day, seven days a week, the precious liquid flows with the twist of a tap, instantly ready for a drink or a shower.

But those living in developing nations know differently. “Do we have water?” is often the question on people’s lips in New Delhi, said artist Atul Bhalla, who grew up in the Indian capital where access to clean water has been a problem for decades. Water in the rapidly expanding city remains scarce and available only twice a day, in the morning and at night.

As a child in the city, Bhalla recalled how residents were only allowed water once a day. As a man, he was enthralled when he sampled his neighborhood’s first swimming pool.

His personal experience has informed much of his art. His projects involve sculpture, photography, installations, and video that explore water in its historic and cultural contexts and that strive to raise consciousness about dwindling access to the vital resource.

On a wall in the Harvard Art Museums/Arthur M. Sackler Museum is one of Bhalla’s efforts from 2005, a series of 14 self-portraits of the artist submerging himself in a placid river. The background’s muted colors and the reflection of Bhalla’s face and shaven head in a flat mirror of water lend the shots an otherworldly, almost spiritual quality. But the work’s title, “I Was Not Waving But Drowning II ”(borrowed from a work by the English poet Stevie Smith that tells of a man struggling in the ocean and frantically waving for help to those on shore), hints at something darker and poses lingering questions for the viewer.

Bhalla was brave to take the plunge. The river is the Yamuna, the largest tributary of the Ganges, and while Hindu teaching says that anyone who dips in its sacred waters will not fear death, it is toxic from years of pollution.

During a gallery talk on March 2, the artist discussed his work with a small crowd as part of the museum’s Two-Point Perspective series, which considers objects from additional vistas.

Explaining his creative process for the project, Bhalla said he and a friend took the shots on a cold, early December morning in the town of Jagatpur, where Delhi’s drains empty into the Yamuna, filling it with raw sewage and industrial waste. His friend first snapped shots of Bhalla from the shore, but was only able to capture the top of the artist’s head. So he stripped down and joined Bhalla in the water, where he took the photos at eye level.

Bhalla said he had to “become one with the water” to remain still enough to achieve the desired mirrorlike effect and to come to terms with being in the polluted river. He also addressed the ambiguity of the photographs and the work’s title, admitting that his creations allow for various interpretations.

“I leave the viewer with a question, so that the work lives on within” them.

During a discussion on March 3, a panel of scholars reflected on the work. Sugata Bose also grew up in India near the river and commented that the once-pristine water is no longer blue and “doesn’t flow as it did before.” Bose, Harvard’s Gardiner Professor of Oceanic History and Affairs, asked the artist if his work reflects his anger, frustration, or exasperation over the state of the Yamuna today.

“I want to keep [that] out of my work,” replied Bhalla, “otherwise I would feel it would become too didactic. Once it’s too didactic, people don’t come back to” it.

Bhalla discussed an earlier public art project where he handed out cups of bottled water near the Yamuna from a kiosk shaped like a water can, along with stickers that read “Have you ever seen the Yamuna? Have you ever touched the Yamuna?” In addition, he presented his piece “Yamuna Walk,” a series of photographs and accompanying text that he compiled on a four-day excursion along the river in 2007.

Both projects were an effort to get people to engage with the river that is barely accessible and largely hidden because of buildings and dams along its banks, said Bhalla.

“If you don’t see it, if you don’t smell it, you are not going to clean it up,” he said, adding, “It’s such an important part of life in Delhi and we forget it.”