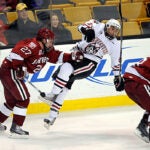 In the women’s Beanpot tournament, the Harvard–Northeastern matchup has always made for a rich subplot. Over the tourney’s 30-odd years, the two programs have managed to win 13 and 14 titles, respectively. What’s more, in their previous Beanpot meetings, five games were settled by a single goal, and four matches went into overtime.

In another nail-biter, Harvard won a 2-1 shootout victory on Tuesday (Feb. 8) after the teams finished regulation in a 3-3 tie in the semifinal game at host Boston College. The Crimson managed to erase a two-goal deficit to force an ultimately scoreless sudden-death overtime, followed by the shootout.

“It was unexpected, how we played initially. I was disappointed how we played the majority of the game until halfway through the third period,” said Harvard coach Katey Stone. “We put ourselves in a big hole. I’m not sure how we got out of it, to be honest with you. But we did, so we feel very fortunate.”

And what a gaping hole it was. After a lackadaisical start in the opening period, the Crimson fell hard and fast following consecutive goals by Northeastern’s Rachel Llanes and Casey Pickett. Dishearteningly, Pickett’s goal — a neat scoop shot under the shoulder of Harvard goaltender Laura Bellamy ’13 —came a mere 1:01 after her teammate’s tally.

Down 2-0 to start the middle period, Harvard found its groove by applying pressure to masterful Northeastern net minder Leah Sulyma, who turned away nine Crimson shots (and 32 for the game). The Huskies managed to extend their lead to 3-0 after a goal by Lori Antflick. But the Crimson stormed back and finally found success on the power play at the 12:21 mark. Forward Kate Buesser ’11 beat her defenders on that one, as Harvard outshot Northeastern in the period, 10 to 1.

The Crimson carried that momentum into the final period, when a surging Ashley Wheeler ’11 converted a pretty feed from teammate Jillian Dempsey ’13 to score and close the gap to 3-2. Less than a minute later, first-year defender Marissa Gedman fired a monster shot from well above the left circle to knot the score at 3, setting up the five-minute overtime.

Despite Harvard’s aggressiveness during sudden-death play (the Crimson had six shots on goal versus none for Northeastern), the extra period ended with neither team managing to score. So it was on to the shootout.

Dempsey skated forcefully toward the Northeastern net before tucking the puck under Sulyma’s right arm. Up next, Katie MacSorley of Northeastern found her effort rejected by Bellamy, who had 15 saves on the evening. After three unsuccessful shots between the two clubs, the Huskies managed to tie things up on their second-to-last try.

On Harvard’s final shot, Josephine Pucci ’13 scored on a low release to set up the 2-1 edge. On the next and final go, Bellamy sealed the deal with a knee block.

“Our goaltender did what she needed to do in the shootout, so that was awesome,” said Stone.

Harvard, which resumes conference play this weekend against Clarkson (Feb. 11) and St. Lawrence (Feb. 12), will try to win the Beanpot championship against Boston College, a 2-1 winner over Boston University, on Feb. 15.