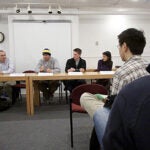 The rapid growth of solar power over the past four years has taken it from essentially an energy geek’s hobby to a full-blown industry, the president of one of the world’s leading manufacturers of solar panels said Thursday (Feb. 3).

Bruce Sohn, president of First Solar, which makes thin-film photovoltaic panels, said that solar energy technology was formerly embraced mainly by two groups: dedicated environmentalists and hobbyists who are drawn to the technology. In recent years, though, the problem of global climate change has driven the search for cleaner alternatives to fossil fuels. Meanwhile, manufacturers have made major strides in reducing the cost of power generated by photovoltaic sources.

“I tend to think about these last few years as really taking solar technology from what I would refer to as a hobby stage to something that is a true industry,” Sohn said. “Up until just a few years ago, I thought of solar as being something for folks who … were either hobbyists who got a fascination with tinkering with this sort of technology or true tree huggers who would pay anything to prevent the de-greening of the [Earth’s] surface.”

Sohn was the first speaker in this spring semester’s Future of Energy lecture series, sponsored by the Harvard University Center for the Environment (HUCE). HUCE Director Daniel Schrag, the Sturgis Hooper Professor of Geology and professor of environmental science and engineering, introduced Sohn, saying that First Solar’s technology makes it an interesting company with respect to marketing low-cost photovoltaics.

The manufacture and installation of solar energy generation has climbed dramatically in recent years, driven by cost reductions and government stimulus funding, according to the U.S. Department of Energy. A January 2011 report [pdf] said the photovoltaic industry hit a record high in 2009, shipping enough modules and cells to produce 1.3 gigawatts of energy, a 30 percent increase over 2008.

Despite the recent growth, Sohn said solar remains just a tiny part of the world energy picture. Spain generates the greatest proportion of its energy from solar of any country, but solar is still just 2 percent of Spain’s energy demand. The United States generates just .03 percent of its energy with solar power, Sohn said.

If solar is to make a substantial contribution to lessening the problem of climate change, it will need to undergo rapid growth, Sohn said, of 30 percent to 40 percent per year. That would take a significant policy boost by the world’s leaders, he said, as well as steps to ease the process of building major solar power plants and the infrastructure to connect them to the power grid.

The relatively high cost of solar power compared with fossil fuels, which has been a major hurdle in the past, is less so today, Sohn said. Just since 2004, First Solar has cut its cost of generating power from nearly $3 per watt to 77 cents per watt. Sohn said the company hopes to reduce that further, to about 50 cents per watt within five to seven years. Sohn said his goal is to drive costs down so they are competitive even without the government incentives available today.

Though a significant part of First Solar’s business is home installations, Sohn said the cost savings and the opportunity to make a dent in the use of fossil fuels comes from building large solar-generated power plants, such as the world’s biggest, which is planned for Gila Bend, Ariz., and which would generate 290 megawatts.

Solar’s potential is enormous, Sohn said. Enough sunlight falls on the Earth each hour to provide a year’s worth of energy for the planet. The problem, of course, is capturing that power. Sohn said the ideal locations to collect solar power would have stable governments and economies, energy demand, visionary leadership, and, of course, sunny skies.