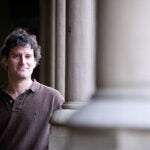 Today’s consumers expect mobile devices that are both smaller and more powerful. All the bells and whistles, however, suck up energy — and a phone that lasts only four hours because it’s also a GPS device is only so useful.

To promote energy-efficient multitasking, Harvard graduate student Wonyoung Kim has developed and demonstrated a new device with the potential to reduce the power usage of modern processing chips.

The advance could allow the creation of “smarter” smartphones, slimmer laptops, and more energy-friendly data centers.

“It’s like shutting off the lights when you leave the room.”

Kim’s research in 2008 at Harvard’s School of Engineering and Applied Sciences (SEAS) showed that fine-grain voltage control was a theoretical possibility. This month, he presented a paper at the Institute of Electrical and Electronics Engineers’ International Solid-State Circuits Conference showing that the MCVR could actually be implemented in hardware.

Essentially a DC-DC converter, the MCVR can take a 2.4-volt input and scale it down to voltages ranging from 0.4 to 1.4V. Built for speed, it can increase or decrease the output by 1V in less than 20 nanoseconds.

The MCVR also uses an algorithm to recognize parts of the processor that are not in use and cuts power to them, saving energy. Kim says it results in a longer battery life (or, in the case of stationary data centers, lower energy bills) while providing the same performance.

The on-chip design means that the power supply can be managed not just for each processor chip, but also for each individual core on the chip. The short distance that signals then have to travel between the voltage regulator and the cores allows power scaling to happen quickly — in a matter of nanoseconds rather than microseconds — further improving efficiency.

“Wonyoung Kim’s research takes an important step towards a higher level of integration for future chips,” says Wei. “Systems today rely on off-chip, board-level voltage regulators that are bulky and slow. Integrating the voltage regulator along with the IC chip to which it supplies power not only reduces broad-level size and cost, but also opens up exciting opportunities to improve energy efficiency.”

Says Brooks: “Kim’s three-level design overcomes issues that hamper traditional buck and switch-capacitor converters by merging good attributes of both into a single structure. We believe research on integrated voltage regulators like Kim’s will be an essential component of future computing devices where energy-efficient performance and low cost are in demand.”

Although Kim thinks that the greatest demand for the MCVR right now would be in the market for mobile phones, the device could also have applications in other computing scenarios. Used in laptops, the MCVR might reduce the heat output of the processor, which is currently one barrier to making slimmer notebooks. In stationary scenarios, the rising cost of powering servers of ever-increasing speed and capacity could be reduced.

“This is a plug-and-play device in the sense that it can be easily incorporated into the design of processor chips,” says Kim. “Including the MCVR on a chip would add about 10 percent to the manufacturing cost, but with the potential for 20 percent or more in power savings.”