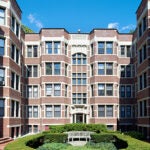 The seeds of Mary Lewis’ fascination with France were planted early. Her father spent a few years there as a young man, working in the offices of the Marshall Plan, so she grew up hearing a steady stream of stories about that country.

“I had never been out of North America,” said the newly tenured professor of history, “but when my father would talk about France’s history, it sparked an interest that is still with me.”

The geopolitically tense Reagan administration years were her political coming-of-age, and the native Californian went to college wanting to understand the Cold War, studying international relations when she attended the University of California, Davis.  She spent her junior year abroad in France, becoming increasingly interested in the diversity of its society.

The final seed that would eventually bear Lewis’ intellectual fruit was planted during a political science class she took upon her return from studying abroad. It was November 1989, the month the Berlin Wall fell.

“We were discussing the theory of mutually assured destruction,” she said. “A young man raised his hand and asked the professor, ‘Can we talk about Berlin?’ The professor was completely thrown. The real world was confronting his theoretical model, and he didn’t know what to do.”

Lewis remembers the professor dismissing the question by telling the student to read The New York Times. That, she said, was the moment she knew she wanted to study history.

“At that point, history had suddenly caught up to political science,” she said. “I realized you really needed history to understand politics.”

After graduating from the University of California, Davis, and before beginning a Ph.D. program in history at New York University, Lewis spent two years working for the U.S. Department of Education in its Office for Civil Rights, an experience she said greatly affected how she studies and thinks about history today.

“I learned a lot about bureaucracy and the layers of bureaucracy,” she said. “If I wrote a letter, it would go through six different levels of editing and end up with someone else’s signature on it.”

“I got a sense of how policy and decisions are layered. It helped me become the kind of historian that I am today.”

Lewis’ improbable interest in bureaucracy informed her first book, “The Boundaries of the Republic: Migrant Rights and the Limits of Universalism in France, 1918-1940” (Stanford University Press, 2007), recently translated into French as “Les Frontières de la République” (Éditions Agone, 2010). The book demonstrates how local actions — far removed from Parisian edicts — redefined the boundaries between French citizens and outsiders in the early decades of the 20th century. By focusing on the limits of legislation in a pluralistic society, the book challenges the common vision of France as a highly centralized nation.

“We tend to think of France as a centralized country with uniform rights decreed in Paris,” Lewis said. “But the actions of immigrants themselves in the provinces, by forcing officials to recognize that they were going to stay in the country, instigated an expansion of those rights. In a sense, today’s diverse French society is a product of that history.”

Today, Lewis’ studies are intersecting anew with current events: She is working on a book about Tunisia, using the case of the little-studied French protectorate there to study how imperial rivalry affected French colonial governance from the 1880s to the 1930s. Pent-up public unrest in the North African country exploded and brought down its government last month.

“Having researched my forthcoming book there, I was surprised that the protests would lead so suddenly to a change in regime,” she said of Tunisia’s overthrow of its president. “It’s a police state.  People have conditioned themselves to be very guarded in conversation when speaking about politics because they know they’re being watched, so the fact that they would have the nerve to protest as they did is remarkable.”

“We think of these societies as being hermetically sealed, because we tend to study them from an imperialist point of view, but in fact people were on the move, and we can see challenges to imperial control based on these varied movements.”

One of Lewis’ favorite parts of working at Harvard is interacting with students.

“They make you think,” she said. “Even if you’ve taught a class before, you’ll get something new out of it because of the student participation. This is positive feedback on a whole other level.”