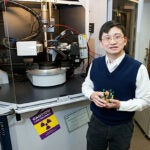 Losing the ‘likes’ and ‘ums’ but finding a community

Ernest R. May was born on November 19, 1928, in Fort Worth, Texas, the child of an American father and a Mexican-American mother who was descended from one of the great Hispanic families of Texas.  Spanish was the second among the many languages Ernest would learn.  His childhood was not always easy, and his path to scholarly excellence was very much self-made.  He studied at the University of California at Los Angeles, where he received both his bachelor’s degree (1948) and a doctorate (1951). He then served in the Navy briefly before coming to Harvard University as an assistant professor of history in 1954.  He was tenured five years later, when he was not quite thirty years old. For more than fifty years, he taught courses on the history of U.S. foreign relations as well as on more specialized topics such as the history of the Vietnam War and of civil-military relations.  He also offered graduate seminars and participated in the core curriculum, where he jointly taught with his colleagues a survey of modern international history.

He was an enormously popular lecturer, and his students to this day retain a memory of him as he would walk into the classroom, throw his overcoat and his hat on a chair, and start a rapid narrative and analysis even before he got to the podium.  He spoke without notes and was an eloquent lecturer, citing official data and occasional anecdotes from all countries.  He was also a tireless, conscientious teacher of graduate students, of whom he demanded nothing but the best—which often meant asking them to read documents in languages that they had not yet learned. When students sought him out for advice, he listened patiently and tried to help.  From the 1970s, May divided his time between the History Department and the newly established Institute of Politics, which later became part of the Kennedy School of Government. He led the faculty study group there for many years and taught several courses, the most popular of which was on the use and misuse of history by policymakers.  Toward the end of his life, he was supervising a number of doctoral dissertations at the Kennedy School as well as in the History Department.

How policymakers arrived at their decisions was an abiding scholarly concern of May’s, who published six books and countless articles on the subject.  His first book, published in 1959, dealt with President Woodrow Wilson’s decision to intervene in the Great War.  His second and third focused on the Spanish-American War and the acquisition of the Philippines, both heralding the United States’ arrival as a world (and, briefly, colonial) power.  His fourth was on the making of the Monroe Doctrine, and his fifth was on the use and misuse of history—“lessons of the past”—by policymakers.  May’s last single-authored book, Strange Victory, published in 2000, examined how Hitler came to choose the successful attack through the Ardennes rather than repeating the strategy of 1914 as he prepared for the invasion of France in 1940, and conversely how the French disastrously failed to process the intelligence warnings they received. In addition to these single-authored monographs, May co-authored a number of books and articles.  One of the earliest was The Ultimate Decision: The President as Commander in Chief (1960), in which he wrote four of the nine chapters.  Several other books were written with his colleagues at the Kennedy School, including Thinking in Time: The Uses of History for Decision-Makers, which he produced jointly with Richard Neustadt on the basis of a course they ran together, and The Kennedy Tapes: Inside the White House during the Cuban Missile Crisis, which May edited with Philip Zelikow.

No historian of his generation matched May in the multi-linguistic, multi-layered study of decision-making.  None so successfully bridged the chasm between serious historical study and policy-making.  In working with colleagues and students at the Kennedy School and in the government, he was fascinated by the fact that the form of analysis most frequently used by policymakers was historical reasoning.  Dismayed by the frequency with which sloppy reasoning produced misleading lessons, he was determined to demonstrate how this form of analysis could illuminate and inform policy choices.  Moreover, from the early 1960s onward, the Vietnam War became a focal point in May’s scholarship and teaching.  He was particularly sensitive to domestic politics as well as inter-agency rivalry and the role of diplomatic and military intelligence.  Over the course of his long career, we believe, he became a reflective and far-ranging observer both of government and life in general.

May served as dean of the College during 1969-1971, at one the University’s particularly turbulent moments (he was in the Dean’s office when undergraduates occupied University Hall), and as chair of the History Department during 1976-1979.  Outside the University, May led an extremely active life. He helped organize, or was a participant in, numerous international scholarly conferences that took him to Europe, Mexico, and Japan, as well as to all parts of the United States.  He served on many professional committees—often chairing them—such as the American Historical Association’s committee on American-East Asian relations that produced important publications long before scholarly exchange with the People’s Republic of China started.  He was honored by his professional colleagues when he was chosen as president of the Society for Historians of American Foreign Relations and received a distinguished scholar’s award from the AHA.  He likewise willingly devoted himself to public service.  At the height of the Cold War, he helped prepare a still-classified historical study of the U.S.-Soviet strategic arms competition, and, after the Cold War was over, he served as a senior advisor to the 9/11 Commission as it tried to understand contemporary terrorism.

May’s students, colleagues in and out of the University, and all those who have worked with him remember him as a quiet, gentle, kind human being who always maintained his serenity.  He is survived by his wife, Susan, and by three children, Rachel, John, and Donna.