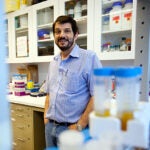 Before a rapt audience in Science Center D on Tuesday night (Feb. 22), two experts in the science of well blowouts told an inside story about the worst oil spill disaster in United States history — starting with the catastrophic fire that engulfed an offshore rig owned by Transocean, who was leased by BP, the energy company formerly known as British Petroleum, to provide drilling services.

Eleven men died, and the uncapped wellhead poured 200 million gallons of oil into the Gulf of Mexico, the equivalent of five Exxon Valdez tankers. The spill cast a web of brown petroleum onto hundreds of square miles of ocean, smothering the spawning grounds for one-half of U.S. fisheries and fouling beaches and wetlands in five states.

There’s still a dispute about exactly how much oil spilled, said Cherry A. Murray, dean of the Harvard School of Engineering and Applied Sciences, who was the lead speaker. “It will be in litigation for 30 years,” and in the meantime as much as $30 billion will be required to restore the Gulf.

Arguments about exactly what happened will go on for a long time too, but the root cause is clear, she said: “management failure.”

Murray, an experimental physicist and Harvard’s John A. and Elizabeth S. Armstrong Professor of Engineering and Applied Sciences, was one of seven members of the National Commission on the BP Deepwater Horizon Oil Spill and Offshore Drilling. The commission, sworn in last June, released its final report in January.

The other speaker was geophysicist Richard Sears, a visiting professor at the Massachusetts Institute of Technology and the commission’s senior science and engineering adviser. He is also the former vice president for Deepwater Services at Shell Oil Co.

The disaster had an immediate mechanical cause, said Sears — the failure of the foamed cement pumped into the exploratory underground well.

But he agreed with Murray on the fundamental cause of the well blowout and consequent spill — a management style that addressed one problem at a time, but failed to see the big picture. Sears called this flaw “hyper-linear thinking.”

The consequences, as outlined in a novel-like first chapter of the commission report, were dramatic. Murray used a PowerPoint presentation to illustrate.

Just before 10 p.m. on April 20, 2010, the offshore oil rig “Deepwater Horizon” — 400 feet high, with a main deck that spanned 12 acres — hovered mightily over calm waters in the Gulf of Mexico, nearly 50 miles from the Louisiana coast.

Steadied by eight GPS-guided thrusters on massive pontoons, the rig was poised over the Macondo lease site. A single pipeline — tapering from 21 inches to just 7.5 inches in diameter — penetrated 5,000 feet to the ocean floor, and then to the wellhead beneath a 50-foot blowout preventer stacked with massive valves. From there, the ever more slender pipeline penetrated another 13,000 feet into a seabed layered with “yellow zones” — deposits of oil and natural gas.

Sears showed an animated film of the “Deepwater Horizon” rig, with pictures that swept beneath its massive superstructure and followed the slender pipeline that connected it to the oil and gas reserves 3.5 miles beneath.

In oil rig parlance, he explained, “deep water” ocean drilling is any that takes place at 1,000 feet down or more — and some Gulf wells go as deep as 10,000 feet before striking the ocean floor.

The BP rig was nothing special, added Sears. There are about 4,000 offshore rigs in the Gulf of Mexico — and the technology remains a “huge part” of the oil business, used by more than a dozen countries worldwide.

Blowouts on these water-sited oil rigs, most of them minor, are “a standard event,” he said — but this one was not.

That night, a sudden column of gas and oil raced to the surface, shooting undetected through the blowout preventer, and gathering pressure and heat as it surged upward. Deepwater Horizon was punched from beneath with a pressurized jet of volatile oil and gas that witnesses said sounded like a freight train.

In minutes, the $350 million rig, the pride of the Transocean fleet, transformed into a cauldron of yellow fire and black smoke. The 11 men who died were trapped on the drilling floor, a deck midway up the structure.

Murray, who visited a sister rig in the Gulf of Mexico in July, marveled at the force of the blaze required to consume the massive steel structure. “There’s nothing burnable on those rigs,” she said — “maybe paint.”

The isolation of the rigs struck her too. “They are in the middle of nowhere,” said Murray. “You look in all directions and you can’t see a thing.”

Pumping cement into a tapering pipeline deep into the sea and the ocean floor is challenging, and so is monitoring flow and pressure from trapped hydrocarbons, said Sears. “But it’s a challenge oil companies meet all the time.”

The blowout preventer hooked to the Deepwater Horizon is being forensically investigated at a secure NASA facility in New Orleans, he said — but the results “almost don’t matter.” It was the cement that failed, mechanically, but more fundamentally it was the BP and Halliburton and Transocean managers that failed. “They completely forgot they had before them a very complex system,” said Sears.

Compounding the failure, said Murray, was the lack of a “change management” procedure — a system of making rapid changes as the reality of a situation changes. (In this case, there were trial failures of the foam cement slurry meant to secure undersea pipe casing — yet nothing changed.)

Beyond management of drilling from the Deepwater Horizon, the commission’s report revealed systemic regulatory and safety flaws, said Murray. The longtime Minerals Management Service (now reorganized) had for decades been charged with competing missions: oil rig safety and environmental protection, but also selling drilling leases that are so lucrative that they are the federal government’s second-largest source of cash after the Internal Revenue Service. “They were paying more attention to bringing in the money,” she said.

At the same time, the incident response plans “for the entire industry,” said Murray, “were laughable. No one ever looked at them.”

Science needs to catch up too, she said — with a better understanding of deep-water drilling and better technologies to contain wells. Advances are critical. America’s future oil reserves won’t be found on land, the report pointed out, but underwater.

Murray and others on the seven-member commission took heat early on for having little science expertise (except for Murray) and for having no oil exploration expertise (including Murray).

So she praised the 60 experts — many of them from federal agencies — who did the technical work.

And the commission’s 380-page report is vivid and readable, said Murray. One secret weapon there: Harvard Magazine’s John S. Rosenberg was the chief editor. 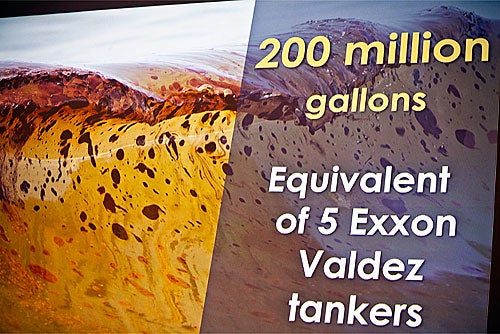