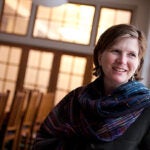 Where women set the tone

Unlike the other undergraduate residences at Harvard, Currier House on the Radcliffe Quadrangle is named solely for a woman.

Audrey Bruce Currier House opened in 1970, named after a Radcliffe alumna who had died in a plane crash. The architects, Harrison and Abramovitz, surveyed students about their desires for housing, and so pioneered small clusters of dorm units, each with upstairs bedrooms and a downstairs living room. Currier also was planned to include freshmen, to benefit from a mix of ages.

Shaped like an E with sloping, green courtyards between the arms, it was the first Harvard undergraduate dorm to house faculty members, and even had a child-care center. Other unusual features included sewing rooms and a laundry in the solarium, a photography studio, a music-dance facility, and a skating court. It now houses men as well as women.

But all of Currier’s four pavilions are named for women graduates. Resident Nadia Farjood ’13 said, “It is inspiring walking through the doors of Currier and seeing the faces of five women, all distinguished alumnae of Radcliffe College, to my left. Most wall space at Harvard is devoted to images of men, and I am proud to live in the only House named after a female.” Farjood is a director of the Athena Program, a gender-empowerment program associated with Harvard’s Phillips Brooks House Association.

Inside Currier, common spaces have offbeat names such as “the Fishbowl,” “the Treehouse,” and “the Mousehole.” Four groups of 10 single bedrooms surround the largest in-suite common rooms at the College. These suites, less aptly named at Currier, are known as “the Ten Men.”

The House that Currier built