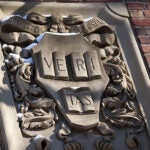 We’ve all wondered how to confront a friend who has mastered the art of not tipping or who always seems to weasel out of paying half the check.

And who can forget the family member who very obviously gifts you used (not even lightly worn!) sweaters for Christmas when you’re ponying up serious dollars for that new KitchenAid stand mixer?

Life’s bottomless cocktail of conundrums calls for a trusted guide to light the way on how to deal with and resolve our conflicts all — mini and tall.

In her regular gig, Miss Conduct, whose real name is Robin Abrahams, doles out advice on readers’ most perplexing dilemmas. But on Jan. 18, she answered questions on workplace etiquette from Harvard’s workforce.

The event was a HARVie chat, a series of informal discussions offering members of the Harvard community the opportunity to learn from experts across campus.

Abrahams, who is also a research associate at Harvard Business School and author of “Miss Conduct’s Mind over Manners: Master the Slippery Rules of Modern Ethics and Etiquette,” dove head first into University employees’ stressful queries:

What to do with a bully boss who loses his temper and raises his voice at you?

What to do when your co-workers work late and you leave right at 5?

And what about your co-worker’s strong perfume that nobody likes? How do you say something without hurting her feelings?

On the topic of the bully boss, Abrahams did not dilly-dally: “If you have a bad boss, you have to get a new job, period. That’s really the only solution. You can talk to an ombudsperson who can help resolve conflicts, but unfortunately, no one can change another person’s nature. Life is too short to work for bad bosses. Take a bad job with a good boss over the reverse any day!”

Tough but sensible, Abrahams didn’t sugarcoat the truth: “All organizations employ bad bosses,” she said. “At least at Harvard, there’s a lot of other Schools and departments you can go to in order to escape them without losing your seniority and accumulated years of service.”

High-five? Consider the impression you’re giving when you leave right at 5, Abrahams told the questioner. Do you want to give the impression that you’re working hard, or hardly working?

As for the smelly situation, Abrahams suggested taking the matter right to human resources. They’re there for a reason, after all.

Many inquired about the role of technology in the workplace — from underperforming co-workers distracted by cell phones to co-workers surfing dating sites. Voice your concern to the person, Abrahams said, or speak with a manager.

When it came to email etiquette, Abrahams recommended David Shipley and Will Schwalbe’s “SEND: Why People Email So Badly and How to Do It Better.”

“Small talk in the office is fine, but work e-communications should only be about work,” she said. “Also don’t keep people on an email chain forever. No one wants to get a whole series of emails discussing the next staff meeting they’re not even attending.”

Abrahams said that in all of her history as Miss Conduct, her most bizarre inquiry involved a man who refused to use workplace restrooms and would instead take a cup into the office library, urinate into it, and pour it down the sink.

Ah, the joys of work.

“Pretend you’re an anthropologist,” said Abrahams. ????Does Jane Goodall take it personally when the chimpanzees throw branches at her? She does not.”

For a complete schedule of upcoming HARVie chats.