Do you speak Cheese? 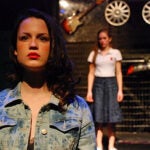 Summer in the city — or beyond

Forget Chinese, Russian, or German. Until classes begin, why not learn how to speak Cheese?

A dozen students took up the challenge Jan. 18 in the first of four classes this week that explored the comforting universe of food. First there was cheese, then soup and bread (Jan. 19), chocolate (Jan. 20), and finally coffee and dessert (Jan. 21).

The four classes — wait-listed and $15 each — were organized by Dara Olmsted ’00, coordinator of the Food Literacy Project at Harvard University Hospitality and Dining Services. “We wanted to do something in-depth over the span of a few days,” she said of the sessions, which included tours, videos, and hands-on kitchen work. “There’s a huge interest in food. You can learn a lot and have fun doing it.”

The food literacy classes were among many offerings during Optional Winter Activities Week (Jan. 16-23), sponsored by the Harvard Undergraduate Council. While 12 students a day looked into the joy of calories, others made films, practiced martial arts, ice-skated, studied hip-hop, or went target shooting.

With time on her hands before classes begin, Dana Modzelewski ’13, a chemistry concentrator, chose to look into the world of cheese, that ancient food renowned for its portability, long life, and caloric density.

She and her one-day classmates started their afternoon in a logical place: Formaggio Kitchen, the iconic Huron Village shop known for its artisan foods. It was the first U.S. retail operation to have its own cheese cave — in this case, a former office in the shop’s stone-lined basement where cheeses are aged in massive uncut wheels. (Julia Child attended the cheese cave’s 1996 opening.)

While the students waited to tour the cave in small groups, there was plenty to marvel at in the store itself: fruits, coffees, pastries, cured meats, bread, blocks of stacked cheese, olives, jams, and shelves of wine. There were displays of kaffir limes (squeeze one over an avocado) and yuzu lemons (best for the zest); pastries to ogle (chocolate malt cake anyone?); and of course dishes of cheese to sample — nutty Morbier, mild and mushroomy Brie Mon Père, and pungent Époisses de Bougogne: “stinky,” a note card read, “and delicious.”

Bilal Siddiqui ’11, who is headed to medical school in the fall, peered at a wedge of Cabot clothbound cheddar. “Savory, grassy, and tangy,” he read from a note card. “Sounds about right.”

What about the cholesterol count? “We’ll pretend it doesn’t exist today,” he said.

To get to the cheese cave, students descended steep stairs and crouch-walked along a narrow corridor. It was lined with pendant balls of caciocavallo and shelves stacked with wheels of cheese, some hand-rubbed by artisans with pepper, walnuts, olive oil, or tomato paste.

Function means letting the cave’s moist, cool air do its work, aging cheeses until they are ready for the knife. (Formaggio keeps 300 to 400 varieties of cheese in stock.)

The world of cheese is a world of craftsmanship, said Gurdal. His staff scours the world not only for fine cheese, but specialty honey, salt, jam, and other artisan products.

The students got another view of artisan cheese in the basement of Kirkland House, where Olmsted screened an episode from the DVD series “Cheese Slices.”

Making cheese an art, and the result is subtly different each time, experts said — a function of the milk, weather, heat, and other factors. “There’s a right person for each one of these cheeses,” said the episode’s Quinlan Steele, who stood by a rack of wheels in his shop on the west coast of Ireland.

Then came work: The 12 students assembled in a Harvard kitchen on JFK Street to make mozzarella and ricotta — good places to start for beginners. All you need is milk, a source of heat, and rennet, an enzyme that causes coagulation. (The mozzarella requires citric acid too, to give the cheese its “stretch.”)

Harvard sous chef Matthew Pierce guided students through the process. “It’s like any cooking,” he said. “It’s not an exact science.”

Emily Groopman ’14, a lifelong vegan until entering college, squeezed heated curds into a rough cube and dropped it into water to cool and set. “You usually don’t have a connection like this with your food,” she said.

Victor Wong ’11, who aspires to a political career in his native New York City, wasn’t a big fan of cheese to start with, but now, he said, “I have a greater appreciation for it.”

Matthew Miller ’11 — once a coffee buyer during a leave of absence — took a break from writing his thesis to look in on two of this week’s classes. His postgraduate plan: Look for a job in the artisan food business out West. “Some of the most interesting people I met,” said Miller of his time off from school, “are out there doing it.”

An hour into a Jan. 19 class on winter soups and unleavened breads, Miller was wrist-deep in cornbread batter.

“If everyone can learn one thing out of this, it’s a good day,” said instructor Brian Corcoran, the Harvard executive sous chef in the Culinary Support Group.

First, students teamed up to make Irish soda bread. They learned to sift flour, tap it in cups for accurate measurements, and “incorporate” — mix — dry and wet ingredients completely. Soon, pans of soda bread were baking in the kitchen’s vault-size Lucks oven.

The students also learned a cooking secret: play. Corcoran substituted extra flour for bran, honey for some of the sugar, and added extra eggs to the corn bread for moisture. And he described these simple breads as vehicles for experimentation. Add currants or raisins to the soda bread, or cheddar to the corn bread.

The wide table in the Harvard bakery was also arrayed with everything that goes into two hearty soups, vegetarian split pea and cream of wild mushroom.

If there is one theme to the week of food classes, it is the comfort of wintertime food. Pierce will lead a session on apple pie today (Jan. 21), and Acton, Mass., coffee guru George Howell (Terroir Select Coffee) will talk about making the perfect brew.

But chocolate — the food class on Thursday (Jan. 20) — might be the thematic outlier. (Students made chocolate truffles, and toured Taza Chocolate of Somerville.)

Still, said Olmsted, with a foodie’s gleam in her eye, “chocolate can be anytime.”