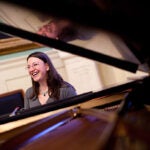 Members of the 107th Congress stood on the Capitol steps on Sept. 11, 2001, relaying information they’d just received from the Bush administration to a tangle of television cameras and microphones. The nation watched as the representatives slowly, and seemingly spontaneously, began to sing “God Bless America.”

For Harvard ethnomusicology graduate student Sheryl Kaskowitz it was a pivotal moment, both for the song and for the role of music in public life. Kaskowitz studies cultural shifts in the song’s meaning and the way it was used, by whom, and in what context, from 1940 through post–9/11.

“People are often surprised when I tell them I’m writing my dissertation on one song. But I’m using ‘God Bless America’ as a lens through which I can look at American history, and the role and function of communal singing in American culture.”

“The song had a huge resurgence in popularity after 9/11 partly because it’s one of the few songs most people know,” says Kaskowitz, “and also because the national anthem is so martial, and Americans just weren’t in the mood for that.”

Congress re-enacts the moment on the Capitol steps each Sept. 11 as a symbol of American unity in the face of terror. But this use of the song is far from its origins in popular music.

“‘God Bless America’ has roots in Tin Pan Alley — it was written by Irving Berlin,” notes Kaskowitz. “When he was in the Army, Berlin was asked to write a musical show called ‘Yip, Yip, Yaphank,’ as a fundraiser for his Army camp in Yaphank, N.Y. He wrote the first draft of ‘God Bless America’ in 1918 as a finale but didn’t include it in the show.

“Because Berlin was Jewish and an immigrant, ‘God Bless America’ had associations with cultural and religious tolerance that are now completely lost. In fact, there was even an early, anti-Semitic backlash against it. I found a letter in the Irving Berlin collection at the Library of Congress from a leader of a U.S. Nazi group — the Protestant War Veterans of the United States — about an imagined Jewish conspiracy involving the song and its royalties.”

In 1938, Kate Smith debuted “God Bless America” as an Armistice Day song. In 1940 Berlin established the God Bless America Fund, through which all royalties from the song would be donated to the Boy Scouts and Girl Scouts. (The New York Councils of the Scouts receive royalties even today, and the song doesn’t enter the public domain until 2034.)

While the song was incredibly popular during the period before the U.S. entry into World War II, it was not universally beloved. Woody Guthrie despised it as sanctimonious, and in 1940 wrote “This Land Is Your Land” in response.

“The original lyrics to Woody Guthrie’s song included the direct reference, ‘God Blessed America for me.’ It was meant as a protest against the way Guthrie felt the song glossed over the country’s problems. But the lyrics of ‘God Bless America’ are so vague, it can really be used for many points of view.”

In fact, “God Bless America” has served as a protest song for both the left and the right. Before the mid-1960s, it was sung by labor unions and civil rights activists, but from the late ’60s on it became solidly associated with conservatism — first by those protesting against the peace movement during the Vietnam War, and later by an increasingly voluble Christian Right to connect God and country. Today it’s a tea party anthem.

Kaskowitz was fascinated to discover that one of the most fertile areas of ethnographic research for “God Bless America” was the world of professional baseball.

“I’m a big San Francisco Giants fan, and I’ve always loved the seventh-inning stretch. Before 9/11, it was always ‘Take Me Out to the Ball Game.’ But right after the attacks I was standing at a Giants game, and we sang ‘God Bless America’ instead. I was immediately intrigued. What does this mean? What role is music playing here? It seemed significant to me.”

“Singing ‘God Bless America’ is a new, invented tradition,” she notes. “Ten years after 9/11, baseball is one of the only institutions that has kept it.”

The baseball stadium is where Kaskowitz sees both the power of group singing and the ideological tension of this particular song. It offers affirmation or membership in a particular group, but at the same time, it embodies so many tropes that it is often evoked to pit one group against another.

“The New York Yankees famously kept people in their seats during the singing of ‘God Bless America’ by stringing chains across the aisles. The ACLU brought a suit against the Yankees in 2009 and won. There was an undercurrent of association between this song and support for the Bush Administration and the Iraq war. Some people objected to being forced into singing it.